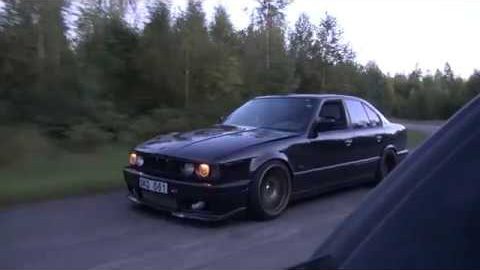 There are few cars better for gauging performance than the Bugatti Veyron. With over 1,000 HP from the factory and the capability to reach speeds in excess of 250 MPH, outrunning a Veyron is certainly a monumental feat that few cars can claim. While we do run across Bugatti’s here and there, they are still incredibly rare rides, so to see one out actually doing a little racing is pretty awesome. To see the owner being so excited to lose a race, a feeling we don’t imagine he feels often, is even more amazing!

Of course, that could just be because of the car he lost to, because if you parked these two side by side and told casual onlookers to pick the faster car, nobody without intimate knowledge of what the BMW M5 is packing would pick it to win. It’s not often an M5 falls into the sleeper category, but this is certainly once case where it is.

The cars come around a long sweeping curve onto what appears to be an airstrip, where they roll into the throttle from a 50 kick and things go… differently than expected. After starting the race from a car length back and spending the first gear or 2 on the rev limiter because the car was spinning, the Bimmer finally hooks up and, in surprisingly easy fashion, putting several car lengths on the Veyron before they shut down on the top end.

We know the M5 is boosted with a huge turbo, one that the guy holding the camera said probably came off a big rig, but we really don’t have any more information about the car, despite getting a look under the hood at the end of the video.

We’ve always loved a good sleeper video, and this is definitely one of our favorites. There’s nothing like seeing a car that shouldn’t win out there taking down cars that are far more expensive.