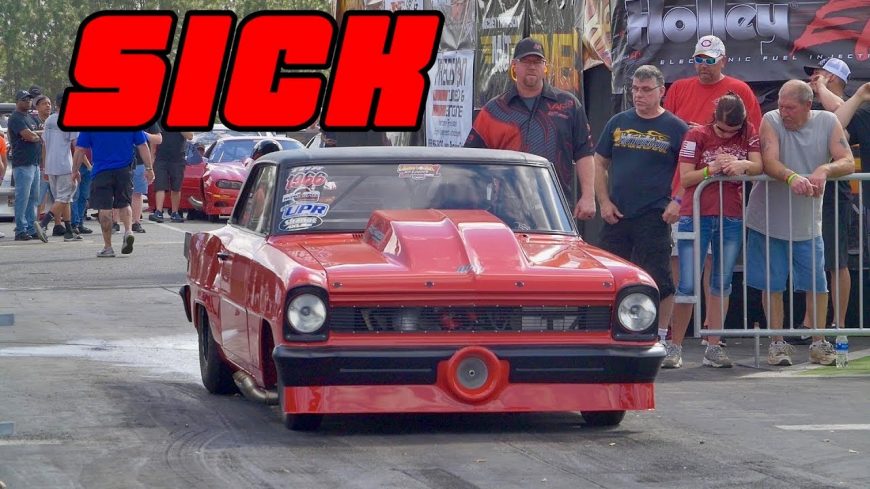 Jarod Wenrick’s Chevy II is easily one of the best-looking cars you will ever find on a drag strip, looking every bit the part of a car that’s escaped the world of car shows and swallowed a ProCharger on it’s way to the races. I remember following the progress of this car as it was being built at Lyons Custom Motorsports and I knew the car was going to be something truly special. As soon as it rolled out of the shop as a turn-key race car, the whole internet froze up for a few minutes as the photos were shared countless times across all forms of social media.

There is more to the car than its stunning good looks, though. Under the low key cowl hood lurks a 1,000+ horsepower ProCharged powerplant that pushes the car deep into the 4 second range in the 1/8th mile on small tires. As you can see and hear in this video, it sounds like Wenrick is having some issues with the transmission or perhaps the converter, meaning there is almost certainly better performance in this combination once everything is sorted out. However, in its current state, the car still managed to run into the 4.50’s and looked damn good doing it at Duck X Productions’ Lights Out 9 held last month at South Georgia Motorsports Park.

Wenrick and his team would have likely had the issues sorted out before the end of the weekend but an unfortunate mishap would end the race prematurely when the car nosed into the wall past the finish line. Wenrick would emerge from the incident uninjured but the car took a pretty hard shot. However, knowing Wenrick and Lyons, the car will come back out looking and running better than ever, it’s just a matter of time and work to get it back on the track.

Thanks, as always, to our friend and partner Justin Malcom of the JMalcom2004 YouTube channel for his awesome footage!