At Tulsa Raceway Park’s Throwdown in T-Town, the Pro Mod finals came down to ...

At Tulsa Raceway Park’s Throwdown in T-Town, the Pro Mod finals came down to these two cars and they put on a stellar show for the fans as they battled it out for the $10,000 paycheck.

In the left lane, we find Eddie Rogers in his swoopy white, purple and green flamed Chevelle, lining up alongside the Chris Duncan Race Cars C6 ‘Vette in the left lane. After laying down some fresh rubber with their burnouts, the cars backed up carefully, then eased into the pre-stage beams. After both cars pre-staged, they inched forward into the stage beams and drop the throttle pedal to the floor.

A flash of amber, then green, as Rogers visibly left first, jumping out to a small lead. That small lead would shrink over the next 660 feet, but Rogers would not be denied, despite the Corvette laying down a quicker ET and higher speed. Rogers’ 3.86 elapsed time needed that advantage off the line to stay out in front of the blue CDRC C6, which laid down a 3.82 ET at a full eight MPH higher trap speed than Rogers’ Chevelle.

The holeshot in Rogers’ lane turned on the win light and put the winner’s purse in Eddie’s hands, making him ten thousand dollars richer on the day, though much of that will be spent on maintenance and expenses to get to the next event. Like most all heads-up classes, fielding a competitive Pro Mod isn’t cheap, requiring constant updates and upgrades to stay up front when the competition is constantly doing the same. On top of that, the cars eat parts, often breaking components even on what appear to be clean passes.

Big congrats to Eddie Rogers and his team for their win, the CDRC team for their runner-up, and thanks as always to Urban Hillbilly Action Videos for their great footage from the event. 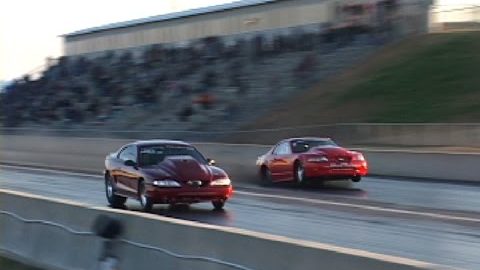