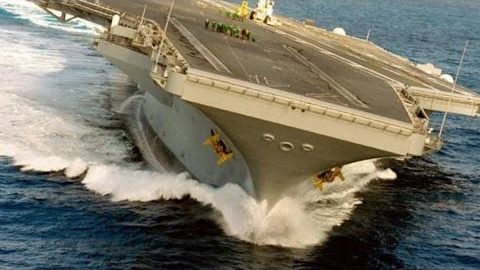 When you think of a massive aircraft carrier plowing through the water, you generally picture the large vessel heading in a straight line and proceeding very slowly. That simply isn’t the case here and the result is something that’s truly rare and fun to watch.

In a testing sequence, this aircraft carrier headed out to sea trials to train the crew on how to react in the case of a worst case scenario and that means pushing the boat to the physical limits of what it’s capable of. That means sideways action is in store for us!

The description of the video tells us that, according to J.D. Levite — an ex-US Navy sailor who spent nine years on one of these carriers — “it’s like a car skid, they ramp the carrier up to full power and then push the rudder to make it turn. That sort of turn usually results in a 10-15 degree list. It’s not much compared to small ships that’ll list 40-50 degrees, but huge for a carrier.”

Check out the video below that shows the carrier drifting through the ocean and savor the moment because this is something that don’t see too often! That has to be a wild experience for those on board.