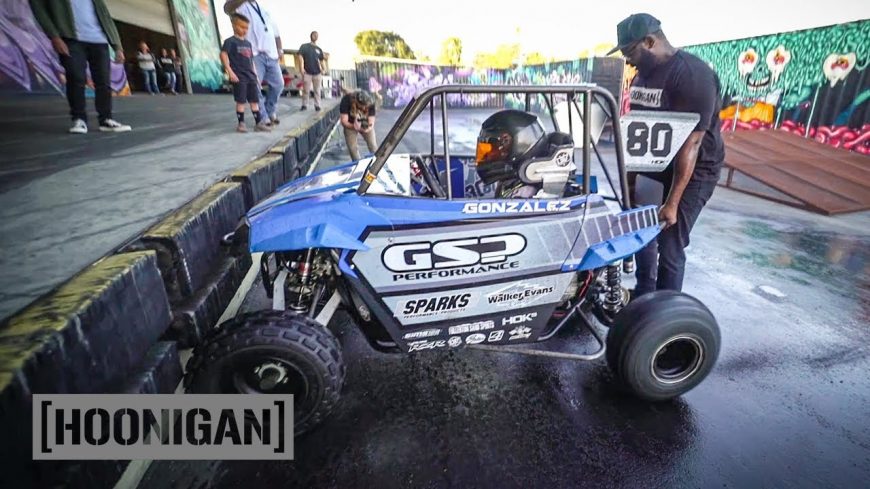 You know what they say, if you get your kids into something creative early on, when they grow up, they won’t have any money left over to get into anything bad with it. It looks like the parents of this youngster took that advice to heart as it really looks like this kid has a good head on his shoulders and he’s making his way into the world motorsports on a level that looks to be beyond what most adults are probably able to do. It’s pretty neat to see a youngster blossom like this in a world of everything with wheels and an engine, all before he even becomes a teenager! We’d love to see his skills when he gets even older with more experience!

This time, we check in with another episode of Daily Transmission from our friends over at Hoonigan and as you might be guessing by now, their special guest this week might be one of the youngest that they have had the day and he brought his toys along with him to show off a little bit. Unlike other 11-year-olds, this youngster isn’t playing with ordinary toys but instead, it looks like mom and dad hooked him up with a pretty insane UTV that is been shrunken down to size for him so that he can compete with other kids where he is actually doing insanely well!

If you follow along down in the video below, you’ll get a little glimpse into the life of the youngster who is really lighting it up, getting work done behind the wheel of his insane machine as he blasts through the competition and even takes a little time to do a little bit of fooling around because you know you can’t come to the Donut Garage and expect to leave without doing at least a little bit of a burnout. However, this kid really kicks it up a level and it’s something that you have got to see so be sure to check it out in the latest episode that you’re not going want to miss.

« Going Legit: The ’55 Gets Legal With Steel Roof And Quarters