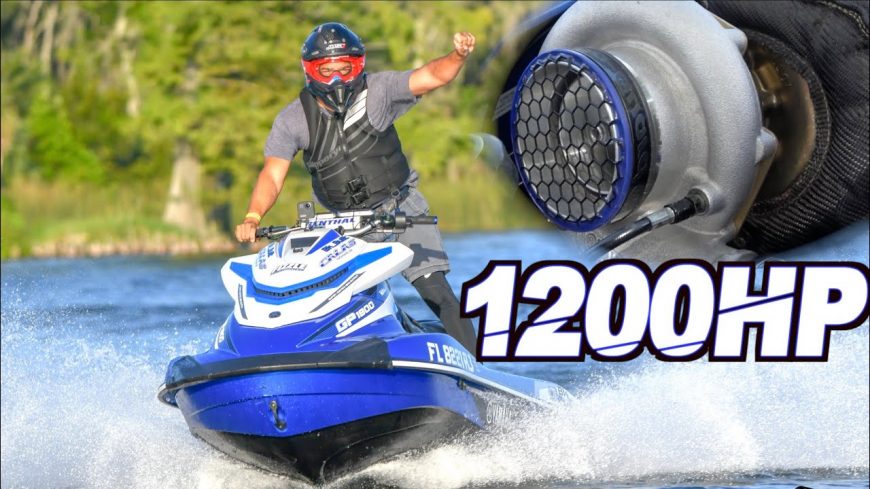 Just when you had thought that you had seen the fastest ski on the water, along comes a jet ski that shatters all of your dreams. just like the world of hot rodding on land, there’s a pretty big aftermarket community in the world of water sports as well. It isn’t just speed boats, either. Instead, plenty of jet ski enthusiasts take to the water with big horsepower builds to get their adrenaline fix.

This time, we tune in with a Yamaha Waverunner that lays claim to the title of “Fastest jet ski on the planet.” We don’t necessarily need to look into the record books to confirm that sentiment, either. After seeing this 1200 hp monster hit the water, seeing is truly believing.

With the machine that’s capable of135 mph on the water, we would think that some massive modification had to go down. Don’t get us wrong, there was a good amount of wrench work involved in making this thing fast. However, it retains a lot of the stock appeal of a ski like this. In fact, the unit still retains the stock hull!

Under the seat, we find the stock architecture of the 1.8L engine that came in the ski. However, the Mitsubishi engine has been beefed up just a little bit to make the DOHC a little bit more durable. Durable, for what, you ask?

Turns out that there’s a rather large precision turbo pumping some crazy boost through the power plant. Throw in a little bit of nitrous and this water-bound machine is absolutely screaming. 135 mph doesn’t seem like a ton here on the land. However, we would wager to think that a variety of people who have never been on the water before would probably bail out pretty quickly when the speeds start to climb that high.

By following along with the video below, we watch as That Racing Channel gets up close and personal with the ski to show us what this thing is all about. – fizzlefactory