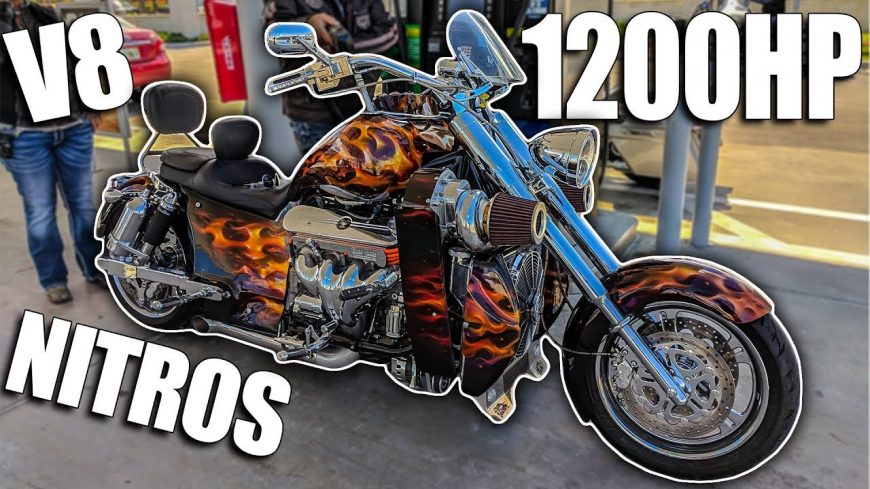 When it comes to insane motorcycles, this one just might be the insanest! Most motorcycles feature compact, high-revving four cylinder engines that make in the neighborhood of 200 horsepower and allow the bike to remain lightweight and nimble. Then there are cruisers like Harley Davidson’s that have torquey engines that that make even less horsepower and are more comfortable for cruising around at lower RPM’s, not carving corners and screaming to 12,000 RPM redlines.

Crammed between the two wheels of this cruiser-style chassis is a 427 CID LS7. That’s right, an aluminum V8 that in stock configuration makes over 500 horsepower. So right off the bat, we have and engine that makes more than double the power of most sport bikes and close to 5 times the power of most cruisers. However, the flamed bike’s owner didn’t just toss a stock LS7 in the frame and call it a day. Instead, he bolted on some forced induction.

We’ve seen GM’s LS engines stand up to some pretty serious boost levels and make huge power, so we know they like forced induction, which obviously prompted the bike’s owner and creator to add not one, but a pair of ProChargers, a combination we have to admit we’ve never seen on a bike, and rarely seen on any type of vehicle. With the twin superchargers cramming air into the engine, the bike allegedly cranks out 1,200 horsepower, a number that’s certainly feasible, though we would love to see this thing on the dyno to back up those numbers.

As if that weren’t enough, the bike is also fitted with a pair of nitrous bottles out back, injecting the engine with an additional 300 horsepower putting the potential horsepower output at 1,500 and making this bike absolutely insane. The owner admits the bike will smoke the tire at 100 MPH, though he says he’s only been a top speed of 150 on this insane monster.