17 Year Old And Her 1013HP Diesel Ford Truck Kicking Ass On The Track! 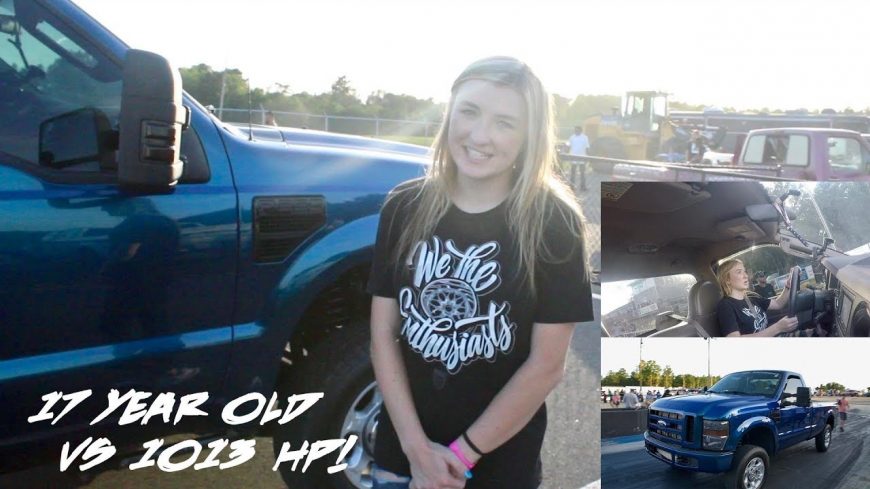 The Street Night No Prep event at Middle Georgia Motorsports Park brought out all kinds a cars and trucks, but the talk of the afternoon was seventeen year old Chelsea Brooklyn and her completely unassuming Ford F250 pickup. Chelsea’s F250 really does look and sound like a showroom stock unit as she’s rolling up to the beams. The only indicator that the truck is anything more than it appears only reveals itself once it’s too late to back out if you’re in the other lane.

You can hear, as she starts to build boost as she rolls toward the beams, the truck sounds a little rowdy compared to a factory Ford F250, but even then it’s not immediately apparent just what is about to happens once the boost hits its peak. As soon as she’s staged up and ready, the tree drops and Chelsea drops the hammer, sending a cloud of smoke out of the truck’s exhaust as all four tires dig into the asphalt. Only then do you realize that when she said the truck makes 1,013 horsepower that she wasn’t kidding. It’s obvious Chelsea is not at all intimidated by the four-digit horsepower levels either, as you can see in the in-cab footage where she looks as comfortable as a grandma out for a Sunday cruise while streaking down the eighth mile.

She puts together an impressive string of three wins, including one against a healthy sounding early model Corvette and another against a turbo fox body Mustang. She finally takes an L in the fourth race against a boosted late model Mustang in a great side-by-side drag race. We definitely expect to see more from this young blonde badass and her massive blue sleeper F250. Just remember if you’re ever out looking for a little street action or find yourself on the track beside what looks to be a stock blue F250 with an innocent looking teenage girl behind  the wheel, she’s probably about to unleash over 1,000 ponies on you, so you better be ready!