This is hands down one of the most spectacular crashes I’ve ever witnessed, and ...

This is hands down one of the most spectacular crashes I’ve ever witnessed, and considering the absolute insanity, it’s quite literally a miracle that no one was killed. The fact that the driver of the main car involved in this incident survived is truly a testament to the safety measures in place in modern F3 cars.

The car that can be seen flying through the air and into a small building just outside the track’s barrier was driven by seventeen-year-old Sophia Floersch, a talented young German driver who has climbed up the ranks from karting to F3 over the past thirteen years after starting her kart racing career at the age of 4.\

Competing at the Macau Grand Prix, Florsch was running in the middle of the field when she made contact with fellow driver Jehan Daruvala, who had allegedly slowed for an erroneously-displayed caution flag between the third and fourth turns on the course. The contact caused Florsch’s car to spin and slam into the car of Sho Tsuboi at a high rate of speed.

The contact with Tsuboi’s car catapulted Sophia and her car high into the air and while still traveling at an incredibly high speed. The car flew over the track’s barrier and catch fence and slammed into the side of the small building, then fell onto the ground beside the building, where emergency crews, which were thankfully stationed in the same corner, began immediately working to extract her from the car.

According to numerous reports, Floersch suffered the worst of the injuries with a fractured spine that required surgery to stabilize. Tsuboi was also hospitalized after compiling of lumbar pain. Two photographers that had been stationed in the corner were taken to the hospital with serious injuries, as well as one corner marshal who was working in the area. We wish all those involved a full and speedy recovery after one of the most insane crashes. 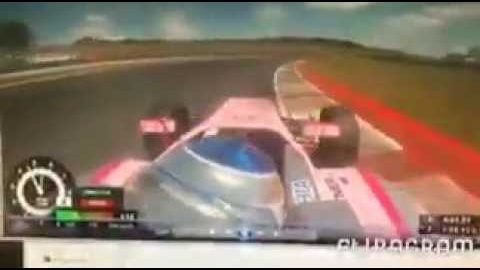