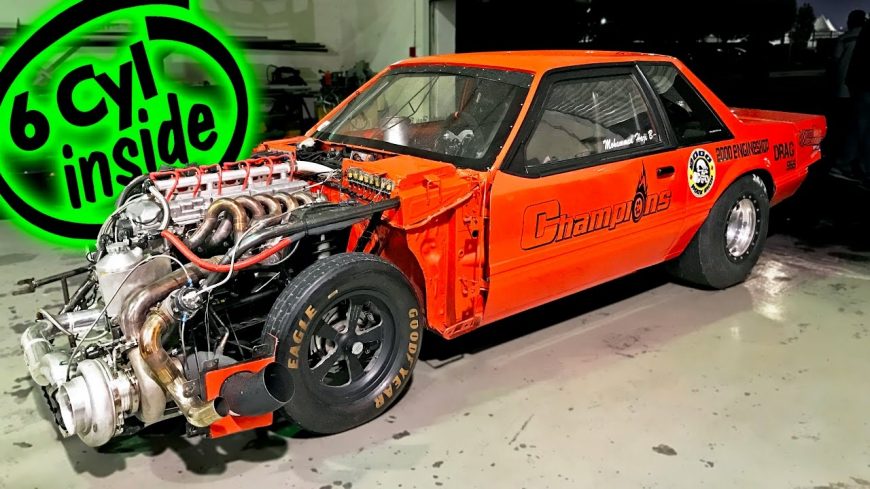 Most of the time, when you hear about a six cylinder laying down 1,700 horsepower, there are really only a couple of engines that come to mind that can make that kind of power, either Toyota’s 2JZ or the V6 out of Buick’s Grand National. However, when you step outside of the United States, there are some other power plants that can be built to make tons of horsepower.

When the guys from 1320 Video loaded up and headed to Qatar, the ran across a Mustang powered by an inline six cylinder. Upon first glance, it’s obvious this is no 2JZ, but instead is a TB48. If that doesn’t sound familiar, you’re not alone, as the TB48 is hardly common in the States. However, overseas they are much more common as a factory engine in the Patrol, an SUV sold by Nissan. This engine also isn’t commonly swapped into Mustangs for drag strip use, but maybe the should be used more frequently. As you can see the six banger does a great job of moving this Fox body coupe down the Qatar Racing Club eighth mile, especially with the massive 98mm turbocharger cramming it full of air!

With 1,700 horsepower on tap, this little six cylinder has plenty of power to push this Mustang well below the 5-second mark. In fact, this car is the quickest car in the six cylinder class, having been as quick as 4.48 in testing. During the event, the coupe manages a best ET of 4.58 at 154 MPH, an awesome run for this combo and well ahead of the other cars seen in this footage. Keep an eye out for more of these combos, as the fox body Mustang is widely known as one of the best platforms for any heads up class, and this engine is clearly up to the task of creating monster horsepower numbers. We’d love to see one of these setups make its way to the US where we can check it out ourselves!

« Goliath 2.0 Spits Out Massive Flames on the Dyno!