Of all the engine swaps we’ve seen, this is easily among the coolest if for no other ...

Of all the engine swaps we’ve seen, this is easily among the coolest if for no other reason that the pure absurdity of it, as well as how completely unique it is.

Let’s do away with the V-style engine completely, and no we don’t mean drop and inline engine in there instead. No, these guys just got rid of the generally-accepted automotive style engine altogether and drop in a radical radial airplane style powerplant instead. That’s right, this is a massive rotating engine designed to drive a propeller, but instead adapted to drive this slick 1939 model Plymouth pickup.

What’s just as cool as the engine is how the builders carried the aeronautical theme into the cab of the truck, where twin steering yokes allow either passenger to steer, or in the case of low speed turns without power steering, both drivers may be required to wrench on the steering to get the job done. I’m not sure if anybody makes a power steering pump for a radial engine, so that may be an ongoing problem to deal with for the driver, especially if he wants to go somewhere alone in the wicked cool ride.

The aircraft feel is carried elsewhere in the build as well, with the hundreds of rivets being used to hold the truck together, especially around the windows, really tying the whole theme together around the massive radial engine. The twin glass panels in the roof are awesome touches that add to the feel of flying as the drivers can look straight up at the wild blue yonder as the engine roars along. It won’t be the fastest pickup on the road, but it may very well be the most unique. Hopefully the project ends up with more cool airplane accents and some pinstriping that matches the bomber look and feel, then we want to see it put through the paces on the drag strip and out on the open road! 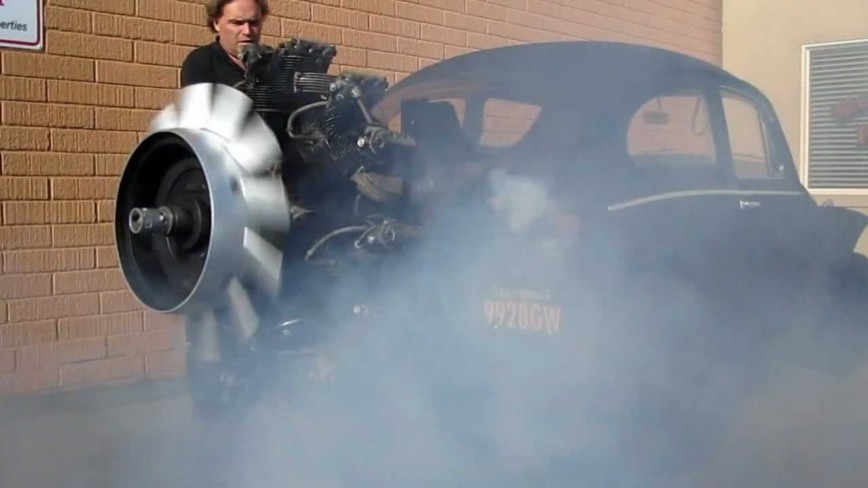