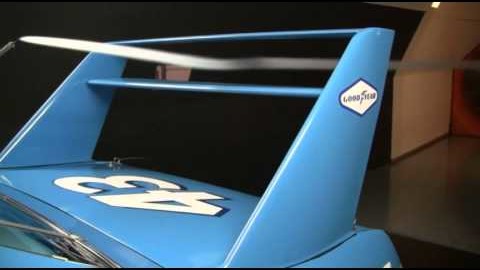 This 1971 NASCAR Superbird is the miracle that never was. According to the video uploader, this car was built as a “What-if” tribute to Richard Petty who instead ended up racing another car that year because of the association’s ban on winged vehicles. Ever since then, the car has resided as a 3/8 scale model which it was developed as until today. Thanks to the notes on the scaled model, the Winged Warriors Club along with Gary and Pam Beineke constructed the car that we see here.

The Superbird is arguably one of the most legendary muscle cars of all time, from the history the car has in racing, movies and to the extreme design. The car you see in the wind tunnel video even made it into the popular Disney movie “Cars” so even the next generation knows all about the style and some of history of the car! Very cool to see how the wing reacts to the wind tunnel showing that the build might actually work in real life and help on the racetrack at high speeds.

Check out the modern day rendering of what was supposed to be as it hits the wind tunnel in stunning fashion below. One of the creators of the scaled version, Gary Romberg, was even on hand to see his creation come to life! Very cool to see your own creation be fully wind tunnel tested. They test almost every curve and line of the Superbird and show how aerodynamic the car really is! They even tested the hood scoops to see how they affect the aero!

Enough rambling from me, I hope you guys enjoy the video and maybe it brings some nostalgic memories back for some of you older guys and girls who were around when these cars were around back in the day! Enjoy the video!

« You Can Order a 1,000 HP Suburban Or Tahoe, Straight From The Dealer