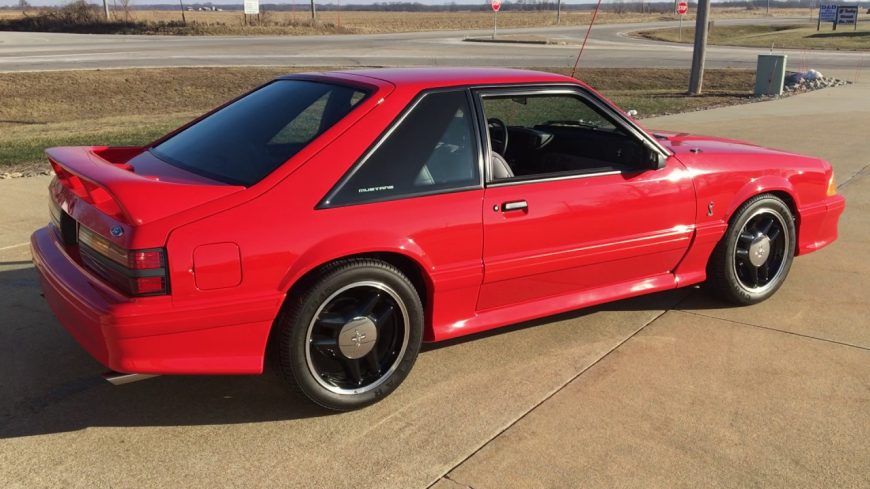 When it comes to some of the most common sports cars seen on the roads these days that can be had at a very unsubstantial price point, look no further than the Fox body Ford Mustang. Most will attest to this car as being one of the best “bang for your buck” rides out there for someone looking to go far with the performance side while saving money. It certainly has a lot of potential but calling the car a high dollar ride would probably be an all-out lie in most cases, especially in stock condition.

Now, if this car is allegedly one of the most accessible on the streets and can be had for just a couple of thousand dollars, if that, why on earth did one version of the body style pop-up at the Barrett-Jackson auction and go for six figures, bringing $132,000?

There’s no denying that the Fox is a versatile car but that amount of money is mind-boggling because these things certainly are anything but rare, well, except for this one particular model. For those who were watching this example of a 1993 SVT Cobra R take the stage and didn’t understand what separates the car from a more common Fox Body, they would probably be left with their jaws on the floor, wondering what just happened.

Looking at the production numbers, which seems to be the most notable part here, we saw only 107 total examples ever make their way to production and they were only sold to licensed racers only. Because the car that we saw at auction last night is perfectly pristine and is said to have just over 500 promotional miles on it, that makes this one incredibly rare. Who knows how many have been totaled on the track and no longer exist? Just by the numbers, this car that would mark the end of an era is one that collectors certainly didn’t want to let get away. However, they would have to play the game to see exactly where the bid would pass what they saw the machine to be worth.

When speaking on what makes the example so desirable, the ad from Barrett-Jackson states that: “This car was delivered to Lombard Ford in Connecticut in the spring of 1993. It stayed there until January 2016, when it was sold to Jerry’s Classic Mustangs in Alabama. It includes all documentation since new. This car has never been dealer-prepped, has never seen water and has only had two previous owners: Lombard Ford in Connecticut and Jerry’s Mustangs of Alabama.”

When digging into what makes this car perform better, I think that many folks would be surprised to find out that there isn’t all that much that would contribute to the higher price on this front, thus reverting back to rarity and cool factor to shoulder the load on value.

Upgrades include things like an upgraded radiator and purge tank along with power steering and engine oil coolers. Other than that, the braking system would be upgraded to 13” Kelsey-Hayes vented discs in the front and 10.5″ vented discs out back and there isn’t much else that separate this, performance wise, from a standard Mustang.

Engine wise, the car would have the exact same 5.0L 302 V8 that could be found in the GT. In fact, the machine would leave off components like the air conditioning and all power options to make it more weight friendly for the track. Other components left behind were the Sound Deadener, Fog Lights, Rear Seat with their Safety Belts, Rear Carpet, Roll-up Cargo Cover for the Hatch, Radio, Speakers, Wiring and Antenna, per Late Model Restoration.

However, the car wasn’t completely stripped down to bare bones as anyone who is familiar with the Fox Body may just have noticed that the Cobra R doesn’t exactly look the same as other Mustangs of the era. Outside, you can see that the shade of red that’s a perfectly dubbed “Vibrant Red” sits atop the custom body features that are Cobra exclusive including the bumpers, side skirts, and a spoiler that are complemented nicely by Cobra exclusive wheels as well. The car was also available in Teal Metalic and black.

« Cars and Coffee Gets Wild When Demon Leaves Sideways