2 of the Baddest SRT8 Jeeps in the World Throw Down! [ALL THE BOOST] 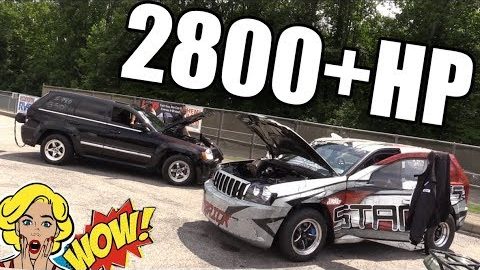 When you consider the world of racing as a whole, one of his beautiful things is that no matter what type of vehicle you’re looking at, just about anything could be made to go fast if you really want it to. If, prior to the release of the SRT8 trim level of the Jeep Grand Cherokee, somebody told you that a Jeep would be consistently running single digit passes before long, you probably would’ve thought that person was just a little bit off of their rocker. However, years later, when people who were born with the need for speed have gotten their hands on these things, we see just how fast some of them can really be.

This time, we take a ride along with the Modern Street Hemi Shootout and check out a couple of the most radical SRT8 Jeep Grand Cherokee examples that you will ever lay eyes on. When BigKleib34 cameras managed to catch up with Harrison Zauke wheeling the Stage 6 Motorsports machine and Jimmy Koutsoubis with the True Street Performance heavyweight, we really get to witness what exactly it is that makes these Jeeps so special as they’ve been paired with a little bit of boost to make sure that things stay interesting. How special are they? Well, let’s just say that, on a good run, both of the machines are capable of running into the 8-second range and beyond in the quarter mile.

If you follow along below, you’ll watch some SUV supremacy like you’ve probably never seen it before. With over 2800 hp combined, you really never know what’s going to happen out there on the racing surface. Even if you haven’t really paid attention to what these heavyweight Mopars are capable of, a couple of SUVs like this will certainly make you snap out of it and come to your senses about keeping an eye out the next time that you see one of these big bodied Jeeps attacking the strip.

« 2019 Mercedes A35 AMG Spied Testing at the Nürburgring