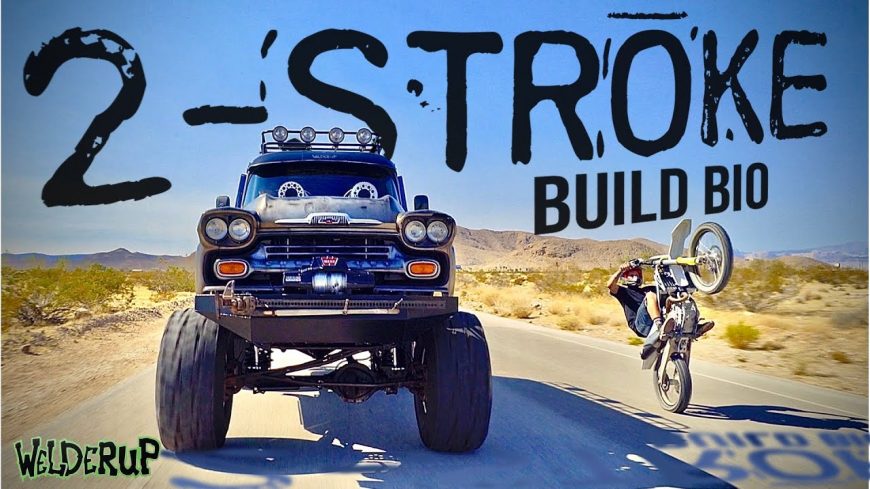 Steve Darnell from Welderup has built a lot of interesting things on his way to stardom. In fact, his creative eye and ability to execute these ideas might be what has put him on the radar of the majority of automotive enthusiasts. It seems as if the more we watch the Welderup TV show, the crazier the combinations get.

Among those machines, we find one that certainly will turn heads anywhere that it goes. The machine started out life as a 58 Chevrolet Apache. However, what remains from the original truck seems pretty limited. Instead, Darnell has turned just about every bolt on the truck, giving it an entirely new appearance and mechanical roadmap to success.

The truck was originally built to pay homage to two-stroke dirtbikes of old. Steve says that he wanted to really get the essence of what it was like to be an old-school dirtbike racer. However, the machine obviously is sitting on more than two wheels so it would be a little bit of a challenge and take a creative eye to follow through with the theme.

This time, we dig into the big, bad machine that really goes a long way toward making a statement. In a landscape of builds that seem to borrow ideas from other builds, this one really is a fresh take. If there’s one thing that we could say about Darnell, it’s that his ideas mostly seem to be his own. In a world where it’s tough to stand out, a machine like this goes a long way toward doing just that.

Down below, we ride along with Darnell as he shows off the creation that has come to life in front of our eyes. With the tour, we learn not only about the physical components that bring it together but also the inspiration that has made this truck stand out.