If you have or have ever had a two stroke-powered motorcycle, dirt bike or four ...

If you have or have ever had a two stroke-powered motorcycle, dirt bike or four wheeler, you’re likely familiar with the trademark massive exhaust pipes that are used to help the zingy engines build more power. Many riders upgrade exhausts to one with a small pipe that expands in to a huge chamber – appropriately named an expansion chamber – which helps the engine breathe and make better power while adding a really cool, hollow note to the exhaust.

As you can likely imagine, bolting a huge section of pipe to the side or rear of a dirt bike or quad means there are inevitably going to be dents and dings, which not only look bad but can affect the exhaust’s performance by screwing with the waves of exhaust as they bounce back and forth inside. As you also may imagine, you can’t exactly reach inside the pipe with a hammer to bang those dents back out, so it seems like a big enough dent might result in the whole exhaust having to be replaced. However, thanks to a little clever thinking and a couple of key parts and pieces, this guy has found the perfect way to restore those expansion chamber dents to their former smooth state.

YouTuber Tokyo Offroad banged his exhaust on a tree, denting the expansion chamber pretty badly. Instead of chunking it, though, he decided to fix it in one of the more unconventional, yet completely cool, ways I’ve personally ever seen. He started by clamping off each end of the pipe with a pair of specialized block-off plates, one of which has a valve stem used for adding air to the chamber. If you’re a gearhead, you know right now where this is going, and it works surprisingly well to be so simple. After heating the dent with a torch for a few seconds, our clever repairman pumps the chamber with 60 PSI of air and then goes back to heating the effected area.

As the temperature rises, the dent slowly vanishes thanks to the positive pressure trapped inside by the block-off plates. Just like that, after a few moments, there’s only a small remnant left of what started as a massive dent. Simple and effective, and also saving a ton of money on a new exhaust… it’s hard to beat that trifecta! 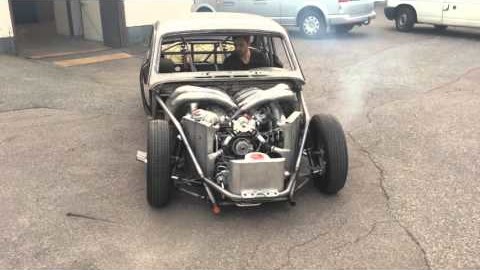