It’s hard to beat a good old fashioned Ford vs Chevy grudge race, especially when there’s a massive stack of cash on the line!

Our buddy Justin over at JMalcom2004 headed to Middle Georgia Motorsports Park with his cameras to catch this $20,000 grudge race and man did these two cars throw it down, putting on a great side-by-side race to decide who would take home the money and the bragging rights.

It’s the nature of the grudge came to keep the combinations fairly well secret, so we can’t dive into the details of what lies under the hoods of either car, but we do know they’re both nitrous cars since they both purge the system while waiting to bump into the staging beams.

With the tires and engines warmed up, the nitrous systems purged and the drivers ready, the crew guys pull the cars up to the line and leave it up to the drivers to do their thing. The wheelmen ease into the beams and hit the transbrake. The race had the stipulation that the white Monte Carlo gets “the hit”, meaning the driver of the Mustang has to wait until the Monte Carlo launches before he can leave.

You can see the drivers aren’t trying to nail the tree, as it drops and there’s a moment before the Monte Carlo launches, with the Mustang hot on its heels. The Chevy drives into a small wheelstand, but the driver does a killer job of pedaling the throttle to keep the nose down without losing too much momentum and just manages to hang on to take the win.

This is the kind of race that makes grudge racing such a huge part of our sport. No times, just a win light and two pretty evenly matched cars, made even more evenly matched by the stipulation that the G-Body gets the dig. Thanks as always to JMalcom2004 for the excellent footage!

Riding The Bumper For The WIN! Mustang Sends It! 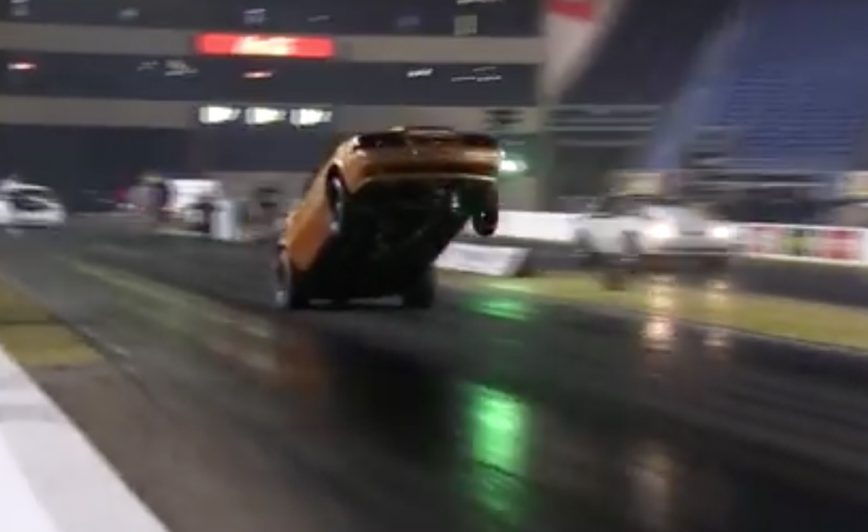