For those who follow along with the antics of everyone’s favorite YouTube mad scientist, Colin Furze, they know that he gets himself into some pretty absurd situations. The guy has creted a little bit of everything from a jet-powered scooter all the way to a hoverbike. His reputation has surrounded taking relatively common objects and re-engineering them in a crazier way. The end result is usually bigger, brighter, and more extravagant than most people are probably ready for. Because of this, we would think that Furze could reason his way through just about any concoction. After all, he has been through a great number of them.

This time, he has teamed up with Formula E in order to make something creative. The whole point of Formula E is that it’s the first all-electric racing league. Naturally, this meant that colin would reason that he wanted to bring an all-electric project to the event. As it turned out, though, he needed to come up with something fast! It was the week of the event and he didn’t have anything suitable. This train of thought would take him to a place where he would decide to replicate a project that he already completed, except with one small change. Instead of a combustion engine, the project would feature electric power.

By following along with the video below, we get the tour of exactly how he managed to create a 20,000-watt electric drift trike. We have seen these things built before. We even have a couple here at the Speed Society offices, in fact. However, we can’t say that we have seen too many with an electric power source. With electric seemingly taking over every facet of transportation these days, this is definitely a project that’s exciting to watch come together. In the scheme of things, there’s a lot to be learned from the process as well.

Mad Scientist Puts A Jet Engine On His Kids Scooter! 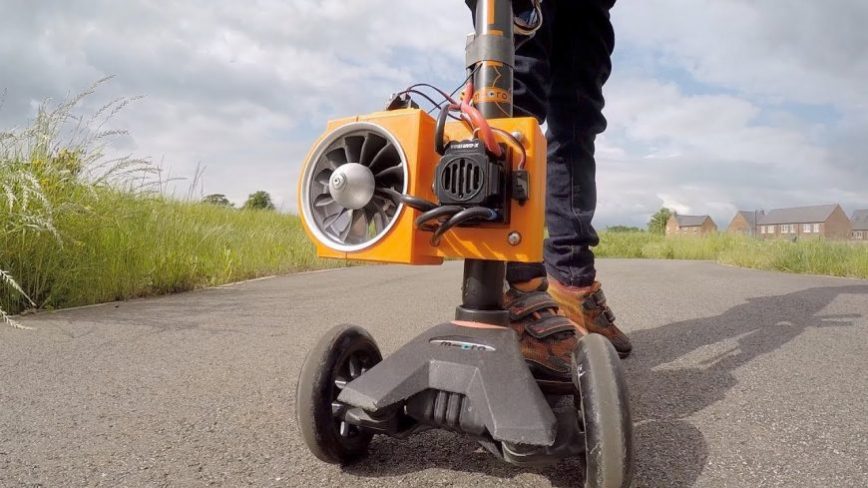