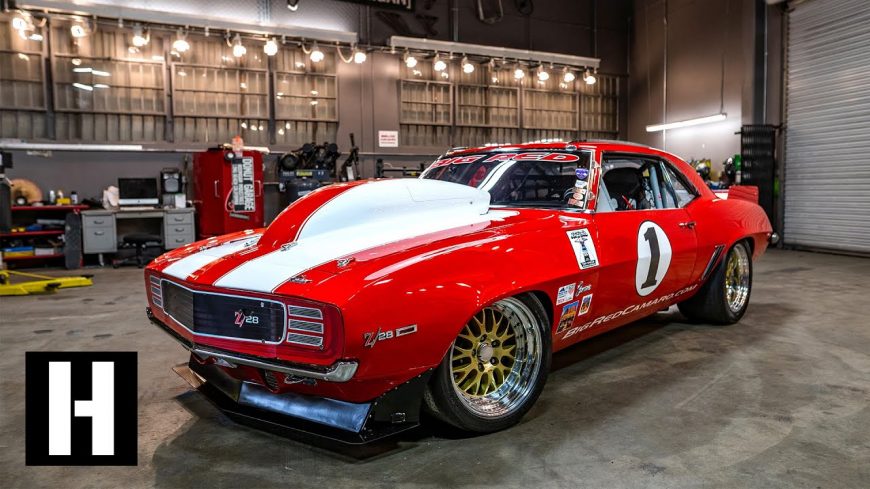 Pro Touring – /prō to͝oring/ – a style of classic muscle car with enhanced suspension components, brake system, drivetrain, and aesthetics, including many of the amenities of a new performance car. These modified muscle cars have been developed to function as well as, or to surpass, the capabilities of the foremost modern performance vehicles.

This is the dictionary definition of pro touring, but for a visual representation, you have to look no farther than the video below. The Camaro featured in this episode of Hoonigan’s Build Biology is quite literally the car that started the whole Pro Touring movement all the way back in the mid-1980’s. That’s when RJ Gottlieb and his dad started building the car that is known today as Big Red, the insane 1969 Camaro that’s undergone many facelifts and overhauls, and continues to be one of the most instantly-reconizeable cars in all of hotrodding lore.

Despite being burned badly in 2016, the car retains nearly all of the stock bodywork. The decklid, which was too badly damaged in the fire, and the custom hood are the only panels that have been replaced. The rest of the body is comprised of the same sheetmetal that was on the car when it rolled off the factory back in 1969.

Under the hood, a nasty 555 CID big block provides ample power thanks to the shmedium sized ProCharger that crams air into the intake, where it mixes with methanol to make the magic boom happen. Spent gasses exit rearward through the trick full-length exhaust that looks as good as it sounds.

There’s really no need for me to get into the details, it would take days of writing to get to the same level of intimacy as the video below, and you’re going to want to watch the video anyway, so just do that. You’re going learn a lot about possibly the most famous Camaro in history.

« Indy car Driver Robert Wickens Who Was Paralyzed In A crash Last Season Is Now Riding A Bike!