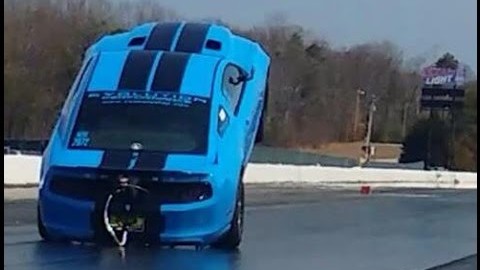 This Evolution Performance built GT500 was most definitely one of the highlights of the weekend at Maryland International Raceway’s Import vs Domestic event as it pulled wheelie after wheelie, spanning most of the first half of the track.

When the 2000hp beast owned by Brian Devilbiss was able to keep the front wheels down, the car known as the Devil’s Reject was able to reel in some impressive passes as well.

We ride along as the team is able to get the car dialed in, keeping all four tires down when it counts, allowing the car to dip into the 7-second range.

Check out the video below as the Grabber Blue Shelby GT500 knocks off a few impressive passes after yanking the front wheels off of the ground.