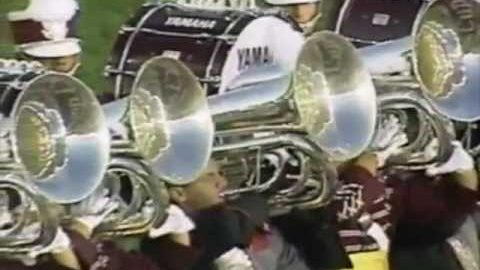 I believe that everybody over the age of twenty two vividly remembers the eleventh of September 2001, the day middle eastern hijackers flew planes into the World Trade Centers and the Pentagon. A fourth plane that had turned toward Washington D.C. crashed in a field near Shanksville, Pennsylvania after it’s passengers bravely fought back against the hijackers. In all, some 2,996 citizens were killed that day and more than 6,000 others were injured in the deadliest terror attack ever carried out on US soil.

A year later, and each September 11th since, our nation has honored those who lost their lives on that fateful day in numerous ways across many platforms, including this tribute below, featuring a beautiful rendition of God Bless America from the Crossmen Drum and Bugle Corps.

Before the field at the 2002 NASCAR race in Richmond Virginia took the green flag, the Corps took to the infield to play Irving Berlin’s famed patriotic anthem. As their brass instruments played each note and the drums pounded out the rhythm, I put myself into the shoes of any given fan in attendance and can’t help but get goosebumps as I imagine sharing the beautiful, poignant moment with the capacity crowd in attendance.

You’ll notice also, as the song progresses, the fans along the tri-oval all hold up colored signs that spell out a massive, arching GOD BLESS AMERICA along the whole front half of the track. The words are so big in fact, their best viewed from the blimp flying high overhead, which clearly shows the tribute from it’s perspective.

I remember very well where I was on that day, and who was with me as we watched in stunned silence on a small television at work. We had very few customers that day, as most everybody was doing the same thing, watching their televisions with a glazed look of fear, confusion, and anger. I certainly hope to never experience anything like that again in my lifetime and I hope my kids never experience it either.

Share with us in the comments where you were on that fateful day, and join us as we pay our respects to those that we lost seventeen years ago today.