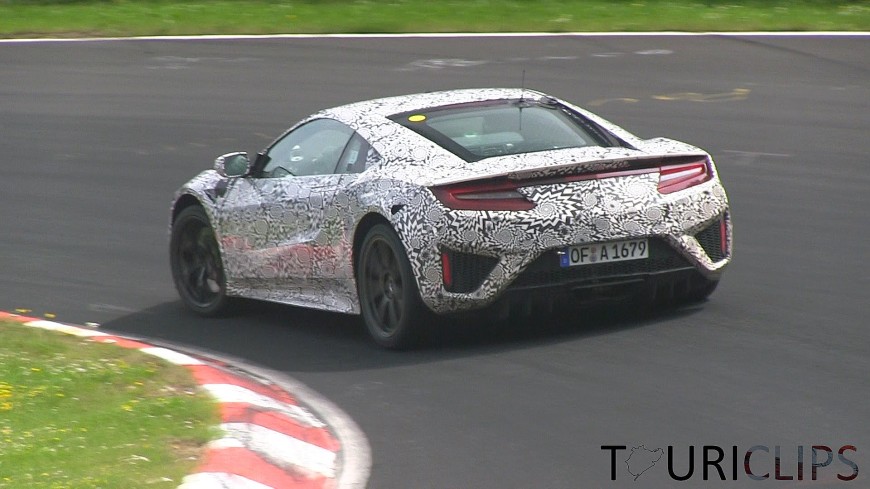 On Tuesday the 22nd of July 2014 we spied the all-new Honda NSX being tested on the Nürburgring Nordschleife. The highly anticipated model has finally appeared in production shape on the infamous German circuit. The Acura NSX is a hybrid-electric sports car, and a revival of the original Acura NSX, which was produced from 1991–2005. The new NSX is set to be released by Honda’s Acura luxury division for the 2015 model year.

On August 4, 2013, a prototype of the vehicle debuted prior to the running of the Honda Indy 200 at Mid-Ohio Sports Car Course. Honda announced plans to build a GTE racing model to compete in the 24 Hours of Le Mans endurance race. Now we see the car testing at the Ring and we are more than excited to see it on the streets.

Some rumored features on the new NSX are use of a three-motor high-performance hybrid system encompassing two electric motors driving the front wheels along with a third motor built into an all-new dual-clutch transmission while a mid-mounted V6 engine will power the rear axle.  Honda has labeled this system as Sport Hybrid Super Handling All Wheel Drive (SH-AWD) and they say it will be capable to provide the NSX reboot with “instant delivery of negative or positive torque to the front wheels during cornering to achieve a new level of driving performance unparalleled by current AWD systems.”