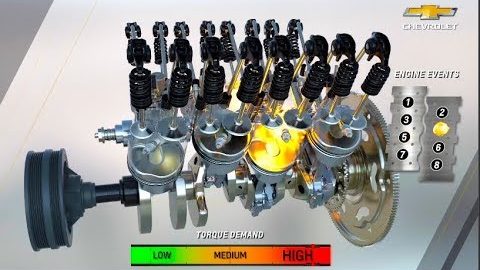 I’m gonna go ahead and say I can’t wait for Jason over at Engineering Explained to get his hands on one of these trucks and dive into this awesome new fuel management system from Chevrolet in the soon-to-be-released 2019 Silverado.

While we are as excited as ever to find out about the new V8 models and how the upgrades under the hood translate when you’re behind the wheel. However, what we are really interested in is how the truck-buying public responds to the 2.7 liter engine that’s replacing the V6 powerplant previously found in the less-expensive models.

Already relatively unpopular, at least with those of us who like a little grunt with our pickup, it’s going to be a bit of a tough sale going to an even smaller displacement engine. While the four cylinder does have the added benefit of turbocharging, we saw that the target audience wan’t very enthusiastic about the turbocharged Ecoboost V6 in Ford’s popular F150 Raptor, so it seems logical that they’ll be similarly-lukewarm about the new engine in the Silverado.

However, there is a marked difference in those looking at less-expensive Chevy pickups and those shopping for Raptors, and that may make a difference for GM. The engineers in this video seem to be pushing the fuel efficiency of the new powerplant, and that may help the reach more potential buyers who are looking for a lighter-duty pickup that doesn’t break the bank with frequent fill-ups. Only time will tell if this was a smart move for Chevrolet, but if they’re marketed correctly this shift toward better gas mileage – while still providing solid power and torque – could push the Silverado off dealership lots faster than the previous generation’s V6 engine.

What do you guys think about this move? Would you buy a full size truck with a four cylinder under the hood?

« The Video That Put Street Outlaws Farmtruck On The Map