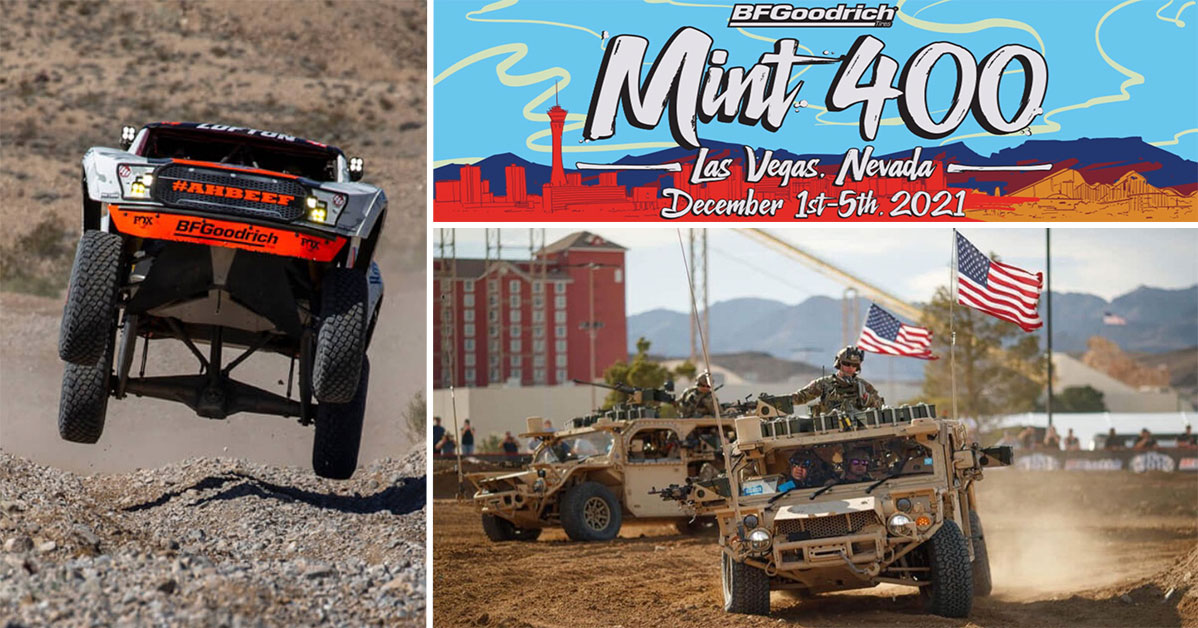 The BFGoodrich Tires Mint 400 returns to Las Vegas, Nevada this December from the 1st to the 5th. . The world-famous Mint 400 has always attracted celebrities and racers from around the globe.

The inaugural “Mint 400 Desert Rally” was held in Las Vegas in 1968 as a way to promote The Mint Hotel and Las Vegas Gun Club. The race has a rich and storied history and has once again become the largest and most important off-road race in the world. The event attracts over 65,000 spectators to Las Vegas for the race and week-long activities. It features a massive field of hundreds of teams competing across an incredible fifty individual classes, including motorcycles which have been reintroduced to the Mint two years ago for the first time since 1976.

The 108-mile loop that extends from the California-Nevada state line in Primm to the Southern edge of Las Vegas in Jean, NV is considered the most grueling and challenging off-road racecourse in America. With five massive spectator areas, The Mint 400 puts fans safely in front of thrilling off-road racing action.

Nearly 65,000 off-road and recreational enthusiasts come to watch 500 race teams in 50+ classes from 25 different states and 15 different countries go door to door, while the Livestream coverage is beamed to over 800,000 viewers worldwide. No other off-road race allows fans the thrilling experience of watching the top off-road race teams from around the world battle for fame and glory, in a festival setting – complete with a luxury VIP section. The Mint 400 is “The Great American Off-Road Race”!!

Grab all your race info here

Down in the video below, we get a little bit of a teaser of what one can expect when tuning in to the race or attending in person. If there’s one thing for sure, it’s that the 108-mile course will be sure to give rise to some interesting situations. There certainly is a lot that can happen out there as the desert conditions can be incredibly grueling.

After checking in with this teaser, I have to say that the countdown is certainly on for the marquee event. Where will you be watching all of the off-road action unfold this year as competitors put their rides and bodies to the test to try and endure the worst that the desert has to throw in their direction?

« Farmtruck Did it AGAIN! – Another Trailer Full of Surprises