$21 Grand To Change the Oil in a Veyron? No Thanks! 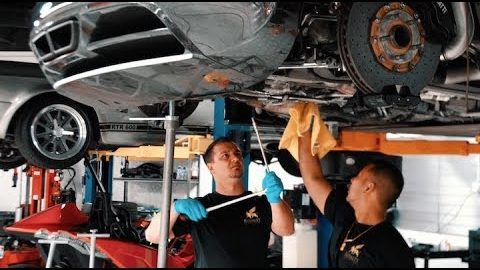 Chances are if you have the money to buy a Bugatti Veyron, you’re not at all concerned with the cost of regular maintenance. After all, owning one of the fastest production cars in history has to come with some overhead, right?

While it’s safe to assume that the vast majority of Veyron owners simply have their car picked up, AmEx Black card tucked somewhere inside, and carried to the dealership for service. A few days later, their car is returned to the garage where they keep it parked with a single swipe on the card worth approximately $21,000. As much as I wish I was exaggerating, that actually the cost of an oil change on this car. To put that in perspective, you can literally buy one of several brand new cars, or a very nice used car for what it costs to have the fluids changed in a Veyron.

However, as mentioned, of you have enough disposable income to toss well over a million dollars into owning a single car, $21K is almost certainly chump change to you, so it’s not that big a deal. For some, even if they do have the money, they can think of about 20,000 better things to do with that money besides spending it on an oil change.

The guys over at Royalty Exotic Cars decide to forego that massive expense and change the oil themselves. With a book listing of 27 hours labor, the job seems pretty daunting, but this crew is confident they can knock the job out if half that time, if not even quicker.

You’ll have to watch the video to see if they are able to cut the time in half, I don’t want to spoil the fun. I do have to say it’s borderline ridiculous to see how much of the car has to come apart to complete what should be simple maintenance. I hate to call such a badass car “overengineered”, but that almost seems to be the case. However, this isn’t something most of us were ever intended to see, so maybe Bugatti wanted it that way for a reason?

« Helicopter Refills Bucket From Pool to Help Extinguish Nearby Fire