233mph, Madman Hangs on, Rips Quickest/Fastest Street Bike EVER Down the Quarter Mile 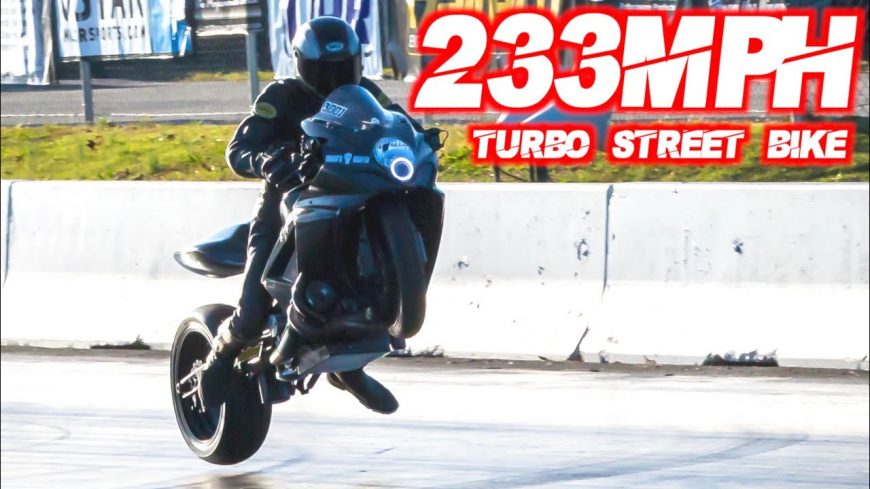 For those who have ever sat back and thought that those who drag race motorcycles have to be just a little bit crazy, we definitely have something for you. Instead of just any old drag raced motorcycle, this time, we head straight to the top shelf to check in with a rig that’s going incredibly fast.

This time, we check in with the quickest and fastest street bike to head down to quarter-mile. It all started out as a Suzuki GSX-R. However, the machine has been modified quite a bit from its original state to accommodate the most brutal acceleration imaginable.

That Racing Channel tells us “Chris Moore’s Turbo GSXR 1000 is an absolute rocket putting down over 700WHP, it runs [email protected] on a street tire and 60-130MPH in just 1.4 seconds! The Moore Mafia built bike put on an exciting show all weekend running consistent 6 second 1/4 mile times and even doing wheelies down the track at over 200MPH. Strap in and enjoy this adrenaline-pumping episode!”

When most people are worried about the 0 to 60 time, the rider behind the handlebars of this bike is thinking more about his 0 to 200 time which likely happens in less than 6 seconds or so. Riding something like this is akin to slapping a set of handlebars on the back of a rocket ship and holding on for dear life. When the front wheel lifts up in the air, things get even crazier and we can’t help but tense up as we watch the magic unfold in real life.

Down in the video below, we all get to go on the ride with the motorcycle that’s cranking out an insane 750 hp. That much power would call for a wild ride in a car. However, this time, we’re checking in with something that weighs in at just a fraction of the pounds.