250+ FT Yacht Plows Into a Pier Trying to Dock in St. Martin

250+ FT Yacht Plows Into a Pier Trying to Dock in St. Martin

It’s definitely a dark day for the crew on board of a yacht when they end up ...

It’s definitely a dark day for the crew on board of a yacht when they end up crashing it into anything. The bigger the boat, the more cringe-worthy the situation feels as we watch it make its way into another object that isn’t giving way.

This time, it was all captured on video when a 77m superyacht ended up crashing in St. Martin. When we say “superyacht,” we mean that this thing is fitted with everything that one could ever want or need. With the help of a crew of 19, the vessel has extravagant living quarters that provide more space than most homes. It also gives its occupants use of things like a swimming pool and a waterfall. It’s even big enough to house another small boat which they call a limousine.

However, no matter how many people were on board or guiding this thing, the effort wouldn’t be enough to help the massive vessel avoid hitting the dock and eventually some other things that would do damage. As it turns out, with a boat like this, it’s not as simple as just stopping it or having someone on the pier to push it off. Instead, whatever it runs into, it’s likely going to cause both big damages to the object that it hits and the yacht itself.

By following along with the video below, we see the incident from a variety of different angles. It doesn’t appear as if anybody was hurt in the ordeal. It’s also pretty unclear what exactly caused this. These sorts of measures are usually highly calculated. Therefore, we would be left to assume that some off-the-wall circumstance had to have come up to make this yacht end up colliding with anything out there in the water.

It is sad that the yacht was attempting to dock at the time and from the videos, it kind of sounds like it was rather windy on that day.

Captain Simon Johnson on the bridge of the mega-yacht “GO”. (Robert Luckock photo) 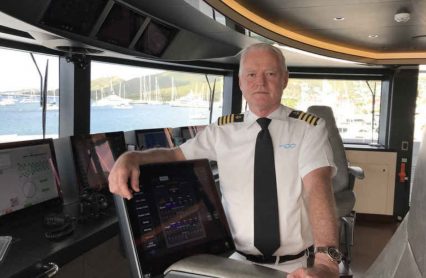 ~ “I am proud that we walked away from a crash landing.” ~

SIMPSON BAY–Captain of the 77-meter-long mega-yacht GO Simon Johnson has sought to dispel rumors, answer critics, and set the record straight in an exclusive interview with The Daily Herald, by describing the moments prior to the yacht’s sudden control malfunction in the crucial minutes of the line-up procedure to exit Simpson Bay Lagoon on Wednesday, February 24.

He says the incident has inevitably brought his competence into question.

The ultra-modern yacht built in Turkey in 2018 is entirely computer-driven, yet for all the latest electronics and a bridge brimming with computer screens and displays, the software apparently failed the British captain at the worst possible moment, leading to his choosing a deliberate impact with the St. Maarten Yacht Club wooden dock.

A second run-in to the dock was caused by, yet again, a computer miscommunication between the bridge and engine room in a bid to regain control.

Johnson confirmed that the yacht’s insurance assessors are progressing well in their survey of all the damage sustained to the boat, which is minimal, and the dock, and are engaged to set things right.

That said, the root causes of the malfunction have not yet been definitively identified and an intensive investigation is underway while the yacht remains at Ile de Sol Marina.

Johnson has defended his unblemished record as a captain and his split-second decisions that averted a far worse disaster. Like an airline pilot reacting to something unexpectedly going wrong mid-flight, Johnson was faced with a similar predicament, the difference being there are 400 souls at stake sitting in a plane at 30,000 feet.

In some ways, Wednesday’s extraordinary incident was Johnson’s “Miracle in the Lagoon” moment. There were no injuries, no lives lost, there was no oil spill, and the bridge was still intact.

“I’m proud that we walked away from a crash landing, and most importantly, there was no injury and the island’s arterial road bridge was not compromised,” he said.

GO’s width is 13.5 meters, the widest yacht to date to come through the bridge with just 50 centimeters of space on each side left to pass (Limitless is 12.5 metres wide). In that sense, lining up absolutely correctly is key. GO has passed through the bridge in St. Maarten perhaps 20 times unscathed, always with a well-trained crew.

“With not much water between us and the bridge, I always set to align my stern and get parallel well in time for the bridge opening,” he explained. “We left the dock an hour before and went through all the checks. There was nothing different from the other times we’ve done this exit. I was in good shape. The wind was a brisk 24 knots and we were being pushed towards the bridge. I am familiar with this maneuver even in even stronger winds.

“Then, when we were about 50 meters away and holding position, the yacht started moving mysteriously forward. There was nothing I seemed to be able to do; all the controls on the bridge were showing normal. I called the engine room and everything was normal down there.

“I found I had extremely limited control, almost limited to only the bow thruster, but with now only 50 meters between us and the bridge I had to make a decision fast.

“We have 160,000 liters of fuel onboard. If I had done that, I would not only have disabled the bridge but potentially breached the hull on the rocks beneath and could have caused an oil spill. My preferred option was to point the bow towards the yacht club dock and beach her gently there. I had a crew member upfront shouting a warning to make sure everyone was out of the way.”

Johnson said he is deeply upset by the incident, but not concerned for his own record. He has done 28,000 miles on GO during his 3½ years as its captain. He has been in the business for 40 years, 35 as a captain, visited 276 ports on GO alone, and often maneuvered her in the tightest places.

“I’m very proud of my handling of yachts,” he stressed. “My biggest concern was not to stop the activity of the island, which I am very fond of, by taking out the bridge. I used to live here and have many friendships over the years.

“The fact that there were no warning alarms, no lights on board to indicate something was wrong was really scary. I know this yacht so well, yet I had 13 seconds to make a decision before hitting the bridge. The decision I made was one I would make again if faced with the same circumstances.”

Insurance assessors have arrived, as well as control systems people. The investigations are ongoing as to how an engine can be locked into gear, and why it never showed up. New parts are being flown in. Johnson indicated the investigation should be concluded by the end of this week.

“We will not leave this dock until Lloyds Insurers approves the repairs and then we will have to do a sea trial to check all the systems. (I might not be at liberty to share a conclusion yet with these investigations ongoing, but it is looking like a computer malfunction seized us into gear). We are of course confident this will be solved.”

He criticized modern electronics as getting “ridiculously over the top” with no manual overrides or back-ups if something goes wrong. GO has 14 computers on the bridge and two more below decks.

“Questions have to be asked in this industry about what’s going on; who is building these boats, who is designing them, who is supervising them, and why we aren’t being asked what we (captains) need to operate them,” he said.

The owner of GO released the following statement: “The owner is extremely supportive of the captain’s decisions and performance. Personnel, economic, environmental disaster was averted for the island. I have full faith and confidence in the captain and am very grateful.” 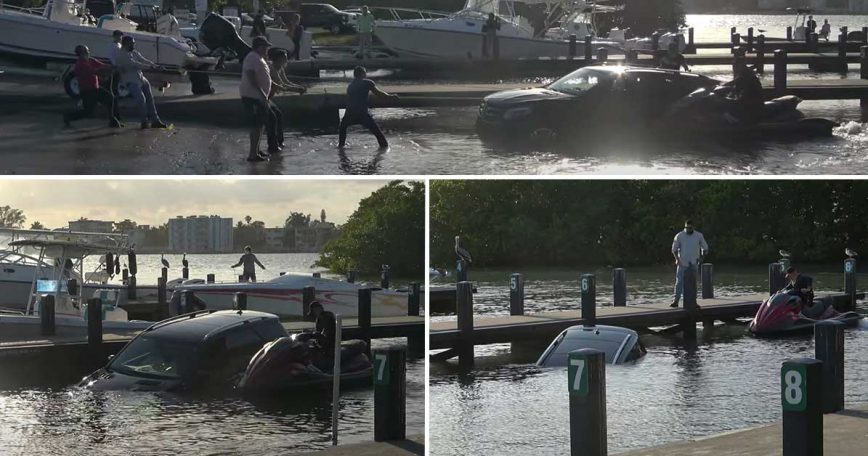