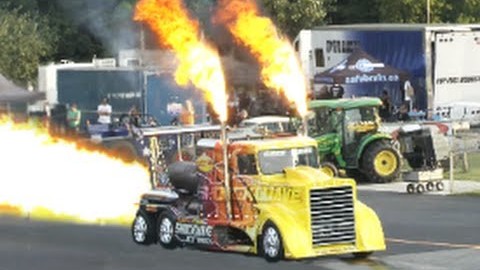 Ever wondered how to make a seemingly unmovable mass, well… move!? Sit down and break out the notepad because the 4-ton shockwave semi truck is here to teach you a thing or two.

This monster is strapped up with three jet engines which produce a whopping 36,000HP. That’s the same as 71 C6 Z06 Chevrolet Corvettes or  30 Bugatti Veyron!

Check out the monster run a 6-second eighth mile in the video below! From what we understand it isn’t the drag strip where this thing thrives, but rather top speed where the truck is capable of up to 400+mph.