If you have ever wondered how hard hitting a tank can be but never really seen one in ...

If you have ever wondered how hard hitting a tank can be but never really seen one in person, this video gives you a real life perspective on just how easily these things can blast straight through cars that might be similiar to the ones that you could see driving around regularly on your local roadways.

With the help of a couple of Leopard 2A6 tanks and some old Volkswagen cars, these massive machines were able to show off their brutality that’s harnessed within. Not only are these things strong, but it actually turns out that they are rather quick and nimble as well, providing just about the ultimate machine to wheel around in.

Watch and learn what these things are capable of as German soldiers hop on board at the Army Training Command’s Grafenwoehr Training Area and go to town, plowing through these cars with ease. Most of the time, the tanks don’t even flinch or shutter one bit, continuing on their trail like nothing has even happened as they cause pure destruction!

If you want to see exactly what these brutes are capable of tune in down below as they completely annihilate their way through obstacles that are laid out in their path. One thing is for certain, I most certainly would not want to be caught in the way of one of these brutal monsters. 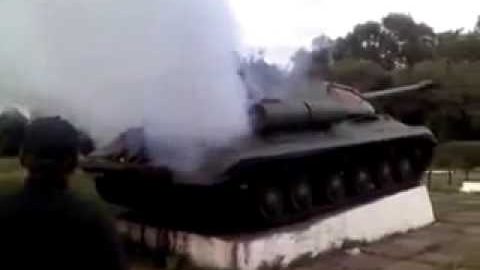