Jay Leno has many claims to fame, but among us car guys, his epic garage full of ...

Jay Leno has many claims to fame, but among us car guys, his epic garage full of historic and exotic vehicles is #1. The amount of hype he’s gained just over his collection since his retirement from The Tonight Show was incredible. So incredible, that NBC did a web series on it. Then he decided to do a YouTube series for the everybody who loved automobiles. This YouTube show did so well that NBC thought twice, and decided to put him back on the America’s TV screens.

He’s driven and ridden in some incredible vehicles on the show. From his personal collection, to the new-edge hypercars of today, many incredible automobiles have graced his show. On the latest episode, he met up with the iconic Bob Riggle, who drove the Hemi Under Glass back in the day. The Hemi Under Glass was a Plymouth Barracuda with a Hemi sitting behind the drivers seat. The fame grew quickly from the killer wheelstands it produced. It is easily one of the most legendary vehicles of the 60’s; when drag racing was all about going fast and beating the other guy.

Riggle gave Leno a ride in this 2,500hp Barracuda at Irwindale Speedway to knock a check off of Leno’s bucket list. Unfortunately, they were at the circle track instead of the drag strip. After doing a killer wheelstand for Jay, he couldn’t get it stopped in time before the bank. He turned to avoid going towards the wall and the car simply couldn’t handle it. The car tipped and rolled a few times. Thankfully, both of these American icons are safe, but the legendary Hemi Under Glass is not looking so good. Check out the video below to watch the carnage unfold.

“This is only the second crash I’ve had in the 50 years of running this car.” – Bob Riggle 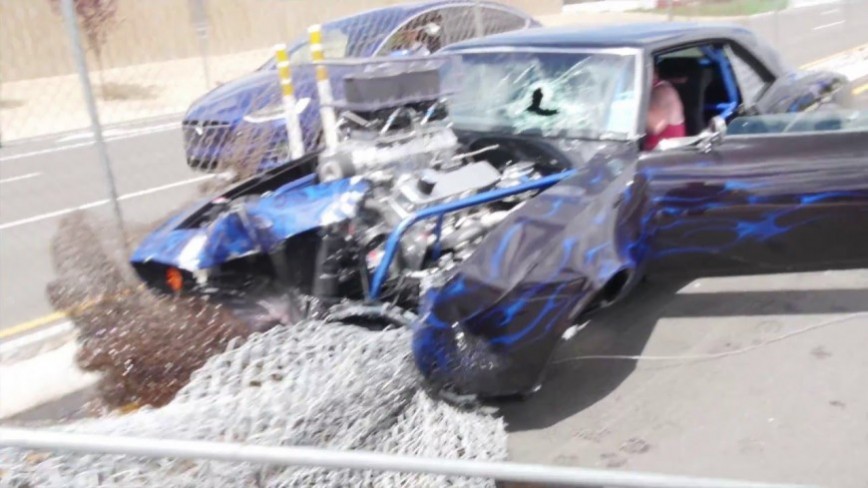