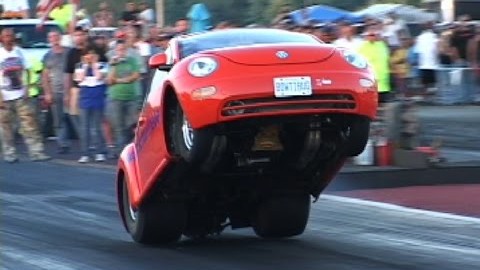 When the folks at Volkswagen rolled the Volkswagen Beetle off of the assembly line, they probably never expected that it would actually be any sort of quick.

Luckily for us, the owner of this Bug really doesn’t care here nor there what the car was designed for as he stripped it down and built it back up to the drag racing machine that dreams are made of.

This crazy Canadian bug is hooked up with a big block and nitrous that allow it to scream off of the line and drag the rear bumper on the ground!

Check out the spectacular dub making some killer passes down the strip at the Byron Wheelstanding Championships. This shocking ride has to be a bundle of fun on the streets!