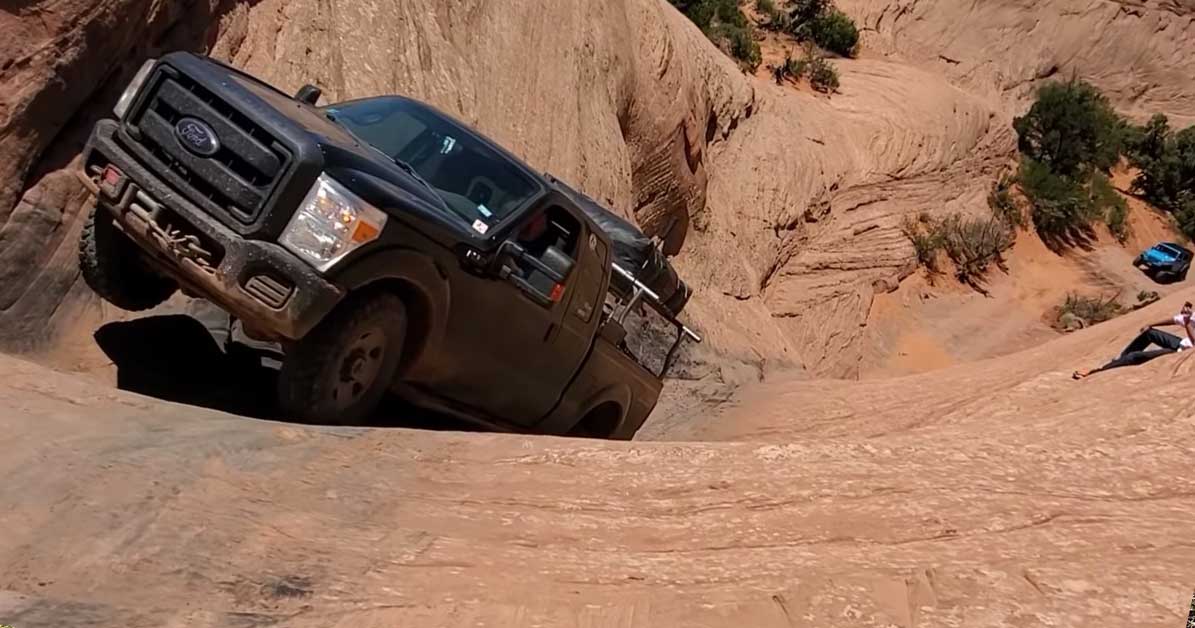 Three-quarter-ton pickup trucks are cool and all. In fact, they have really become a popular option in the market these days. However, let’s just say that they aren’t the best possible choice for every purpose. Instead, when it comes to something like the world of off-roading, they are actually a pretty bad option, in most cases.

Sure, because these trucks have four-wheel-drive, you might be able to get away with some things. However, because bigger trucks generally tend to tip the scales on the heavier end and come in with a big and bulky frame, taking them off of the beaten path isn’t always recommended. It’s much easier for a light and nimble vehicle like a Jeep Wrangler to lift itself through the more challenging obstacles.

However, this time, we get to see a pretty awesome exhibition. The subject of discussion is a climb that’s known as “Hell’s Gate” on the “Hell’s Revenge” 4×4 trail in Moab, Utah. For those who aren’t too familiar with Moab, it’s an area where off-road enthusiasts go when they are looking for a little bit of a challenge. In other words, it’s not somewhere that someone would typically take their Ford F-250.

This time, though, we check in as this Super Duty goes above and beyond to show off its abilities. The impressive thing about this truck that conquers a trail that nobody thought it could is that it’s relatively stock.

The video description tells us that this 2015 Ford F-250 equipped with a 6.2L V8 is fitted with 34 inch Toyo tires, 4.88:1 gears, sliders, and a factory suspension with sway bars connected. In other words, most of the modifications that would typically be done to a vehicle in order to go off of the beaten path aren’t done here. However, that doesn’t seem to discourage the owner of this pickup from taking on the trail with a vengeance and absolutely owning it!