NHRA Top Fuel is the pinnacle of motorsports, at least when it comes to acceleration, ...

NHRA Top Fuel is the pinnacle of motorsports, at least when it comes to acceleration, horsepower, and brutal, retina-detaching g-forces. Statistically speaking, the sport is heavily male-dominant, but don’t tell that to Redlands, California native and Team Speed Society driver Leah Pritchett. Pritchett has taken the helm of the Papa Johns-sponsored digger under the Don Schumacher Racing banner and set the world on fire, winning three races early in the season and setting the current elapsed time world record at Phoenix with a blistering 3.658 pass.

Before all of that, Pritchett’s story began as most drag racers’ stories do, at the drag strip with her father. Leah began her career in the half-scale junior dragsters that have launched the career of many of today’s top stars before moving up the ranks when age allowed. Witnessing the spectacle of top fuel, Leah knew she eventually wanted to drive the nitromethane-fueled monsters, and after stints in Pro Modified and Nostalgia Funny Car, Leah reached the top, earning a ride in the fastest accelerating class in all of motorsports. She took her first professional victory in 2016, and is in the thick of the championship points chase in 2017, currently in second place just a couple of rounds behind the leader.

Having been right there in the pits with Leah and her crew several times now, I can personally verify that the chemistry she speaks of when talking about the guys that prepare her 11,000 horsepower hotrod for battle is a true synergy usually reserved for best friends and favorite cousins. These guys spend nearly every day together, a situation that can be trying for the closest of friends, but these guys work so well together that they seem much more like a family. In a sport often driven by ego, these guys have none, and neither does Leah, who is always quick to give her crew guys all the credit for the team’s success. Watch the video below and learn more about the woman behind the wheel and how she got where she is today.

Leah Pritchett wins her THIRD race of 2017 in Houston 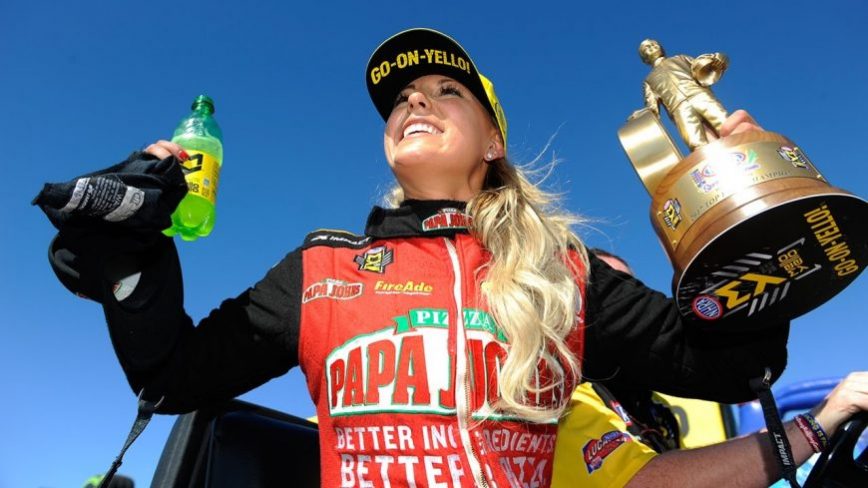