Normally, when we bring you a video of a supercar getting into trouble, it’s ...

Normally, when we bring you a video of a supercar getting into trouble, it’s because the driver might have out wheeled their abilities. Sometimes, when you get behind the wheel of a car like a Porsche 918, a machine with plenty of power, it can be easy to let it get away from you and therefore, viral videos come about when somebody happens to be standing there with a camera filming the entire thing to post to the Internet. For this driver, though, he ends up having some of the ill effects of such a situation without even doing anything wrong in the least.

Instead, we tune in as somebody is filming gorgeous cars rolling out of some sort of rally location when the Porsche pulls up to the plate and is the next one to make the turn out of the parking lot. Instead of all going smoothly and the car just continuing onto the road, it turns out that a nearby fence ends up blowing over and falling on the roof of the Porsche. As if just any old fence wouldn’t be bad enough, it looks like this one was actually a little bit heavier and made of a material that could definitely do some serious damage to a car that’s worth over a million dollars.

We have to warn you, the video below might just make you cringe inside a little bit. As the fence falls on top of the car, it doesn’t appear to do too much major damage but we definitely can identify with the feelings of that drivers having as his gut probably turned upside down just thinking about any kind of dings and scratches that the fence might have left behind. That’s certainly not a situation that we would want to be put in. Hopefully, it’ll just buff out and he won’t need to call any professionals to get it fixed. 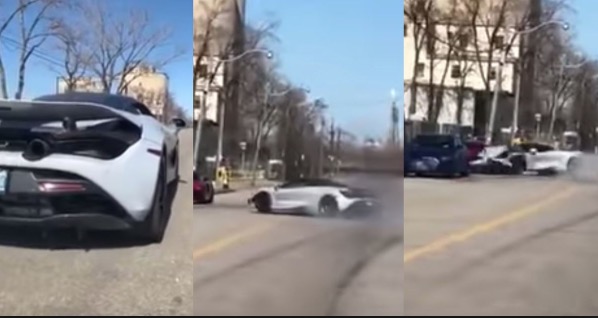