A Runaway Jet Engine is Something You Don’t Want in your Back Yard! 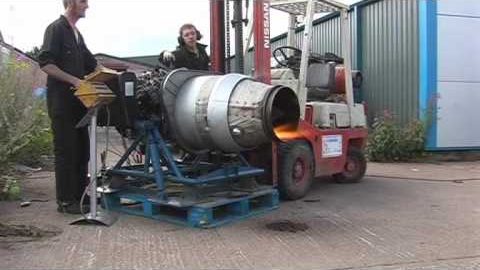 We’re gonna assume OSHA hasn’t seen how these guys test this small jet engine, using a forklift and their hopes and dreams to hold it in place.

All seems to be going well at first, with a controlled startup, but shortly after the engine kicks off it begins to drip ignited drops of fuel from the exhaust, indicating that something may be amiss with the fuel delivery. A few moments later, the engine’s RPM’s begin to climb rapidly and the makeshift test stand is just barely able to keep the screaming powerplant from taking flight. The onlookers in the background exited the premises quickly, leaving the guy at the controls alone to manage the near-disaster, which thankfully ended with everything – and everybody – still intact.

Take notes for the next time you take your jet out in the back yard to fire it up, and at least strap it down to something solid!