There are countless abandoned dragstrips spread across the nation, many of them ...

There are countless abandoned dragstrips spread across the nation, many of them nothing more than a strip of asphalt and a pile of debris that used to be the timing tower and bleachers. It’s a shame to see these once-operational tracks left to rot and be reclaimed by the earth, but that’s often the fate of tracks when society reaches a little too close to the track and the new neighbors complain about the noise, or sometimes there’s just a loss of interest from the community.

As you can see in this video below, the track has clearly been shut down for a very long time, as there’s nothing left but the track itself, and it’s even beginning to crumble as the earth reaches up and starts to take back over. It seems this track was closed down due to damage from Hurricane Agnes, which stuck the area in 1972. Based on the name painted on one of the small structures that’s still standing – and surviving the years surprisingly well – it would seem the track is located in or near Pocono, PA.

The explorers found quite a few notable pieces in the underbrush, from body parts to a section of what appear to be hand-made bleachers, to a small carburetor left lying on the ground. The pics from days gone by show the track was once a pretty big draw. In the 60’s and 70’s, drag racing was a rapidly growing sport that drew crowds of all ages from coast to coast. As the 70’s saw tighter restrictions on emissions and fuel prices jumped almost daily, the sport’s growth slowed over the next couple of decades, leading to many facilities that sprang up during the explosion being shuttered for good. The Pocono Drag Lodge had a reunion in 2009, which might explain the seemingly fresher-than-expected coat of paint on the building that has the name on it. 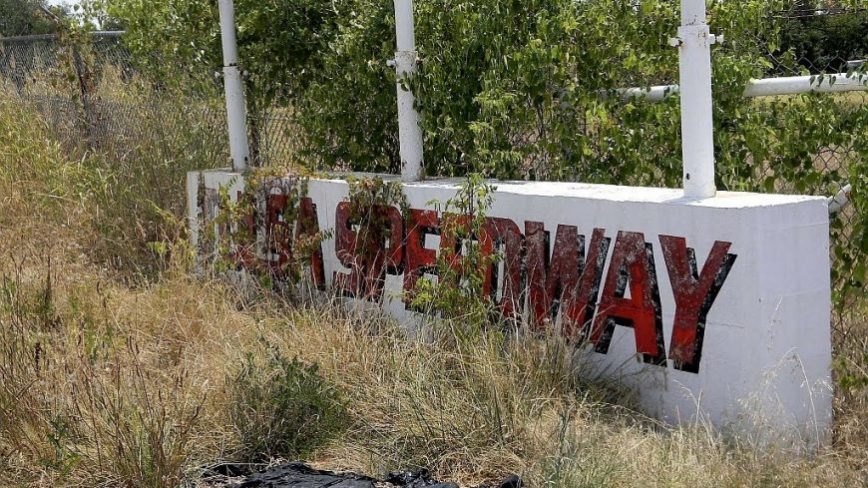