If you’ve spent any amount of time in the YouTube category that showcases all ...

If you’ve spent any amount of time in the YouTube category that showcases all sorts of abandoned buildings and structures across the world, there are really some creepy things to behold out there. Some places look like there were people in then one day and then the next day, they just didn’t show up for work, leaving all sorts of fixtures and even items that they would use on a day-to-day basis like coffee cups sitting on the tables, still half full with coffee. It really makes you wonder what catastrophic event went down that made such a place unusable to the extent that it couldn’t be sold to the highest bidder to take advantage of its resources.

This time, we check out some creepy pictures from the abandoned Tulsa Speedway that might just spook you out as it falls right into that category, showing off the grounds that have been left for dead. You would think that, with something like a race track, someone, somewhere would hop to it and grab a place up like this even if it were just for their own personal leisure.

However, that certainly wasn’t the case here as whoever owned this track didn’t seem to be able to do anything with it. It’s really sad when you think about it as there have probably been a lot of good showdowns at this track to be enjoyed by many spectators and racers alike.

Check out the video down below that shows you a couple of scenes from such a location that give you an idea of exactly how it was left in disrepair to be eroded away for all these years. When something like this rears its head, you’re left to wonder if it will ever be brought back to life or if it just simply will sit there until becomes nothing more than a pile of dust. I know that there’s a small part of every race fan out there that simply wants to go out and remedy the situation and bring this track back to life once again.

Kids Sneak Into an Abandoned NASCAR Track And Go Exploring... The Footage is Amazing 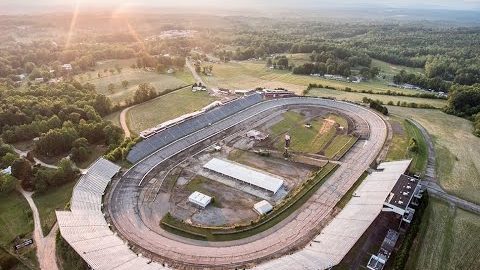