Abused 426 HEMI – Brought Back to Life on the Dyno! 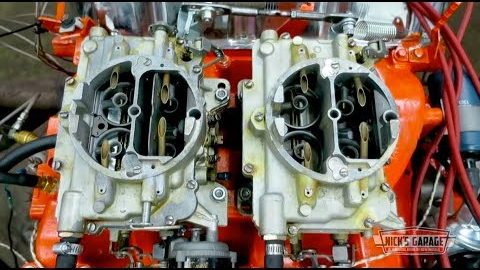 Back in the winter, the head from this badass 426 CID Chrysler Hemi was damaged while the engine was being prepped for a dyno session at the shop behind the Nick’s Garage YouTube channel, meaning it had to be pulled off and repaired. Now, nearly a year later, the head is all patched up and ready to bolt back on and complete that dyno test.

The engine is destined for a future in a clean drop top Plymouth Satellite, brought to Nick’s Garage from my home state of Alabama, where it should push the car to some screaming top speeds without even breaking a sweat. However, before the massive bullet can dropped between the fenders of the Plymouth, the car’s owner Joe wants to see what kind of power it makes on the dyno, so Nick gets the powerplant dialed in on the test stand and makes a couple of pulls to make sure everything sounds okay and to see what kind of numbers the engine makes.

With almost 440 HP and 465 ft/lbs of torque on tap, Joe is more than happy to get the engine pulled off the dyno and get into the process of dropping it into his Satllite. The dyno session in the books and the Satellite sitting ready for it’s new heart, Joe heads back to Alabama while Nick gets ready to drop the engine into its new home.

As Joe heads out in his bright green Hellcat, he’s almost certainly hoping to return and pick up the Plymouth with it’s new monster engine in place as soon as Nick is able to get the swap done. What do you think, race fans: Would you go with the old school hemi, or would you rather see a new Hellcat engine stuffed under the hood of Joe’s drop top? We don’t think you could go wrong either way, to be honest!