Speed Society’s very own Alex Laughlin made the most of his weekend trip to ...

Speed Society’s very own Alex Laughlin made the most of his weekend trip to South Georgia Motorsports Park for Duck X Productions’ No Mercy 9, taking home the runner-up trophy in the baddest small tire racing class in the world, Radial vs the World. In this live feed from Drag Illustrated head man, Wes Buck, we get a great view of one of the most anticipated races of the weekend.

Before eliminations began, Alex had called out Andrew Alpea and his wicked boosted C7 for a $10,000 grudge race in qualifying, but Mother Nature prevented that matchup from taking place. As fate would have it, though, the ladder matched Laughlin and Alepa’s hire wheelman, Daniel Pharris, in the second round of competition, so they got to go at each other heads-up anyway.

Laughlin’s badass blown C6 ‘Vette was one of few cars to make an A-to-B pass each time out, putting up insanely quick and consistent numbers all weekend. Pharris’ ride has already been in the 3.60 range and is known for putting up huge numbers, so this was shaping up to be a battle, although it was somewhat anticlimactic when the tree dropped.

As soon as the driver’s saw a flash of yellow, they unleashed their beasts. Laughlin laid down another solid, seemingly effortless pass straight down the track while the dark maroon ‘Vette in the other lane smoked the tires, leaving Alepa, Pharris and their helpless to do anything but watch the Speed Society sponsored C6 roar into the distance.

Don’t let the relatively drama-free pass fool you, though; Alex would go on to post low ET of the round in each round of eliminations except for round 1, where he was second quickest to Mark Micke and the final, where he just got nosed out by Jeff Naiser. The car may look like it’s on a nice, safe pass, but it’s certainly laying down a ton of power, thanks to the tuning expertise of blower-combo savant Frankie Taylor. This is only their third race with this car, so look for this team to continue to find their groove and go rounds as they get the combo dialed in. 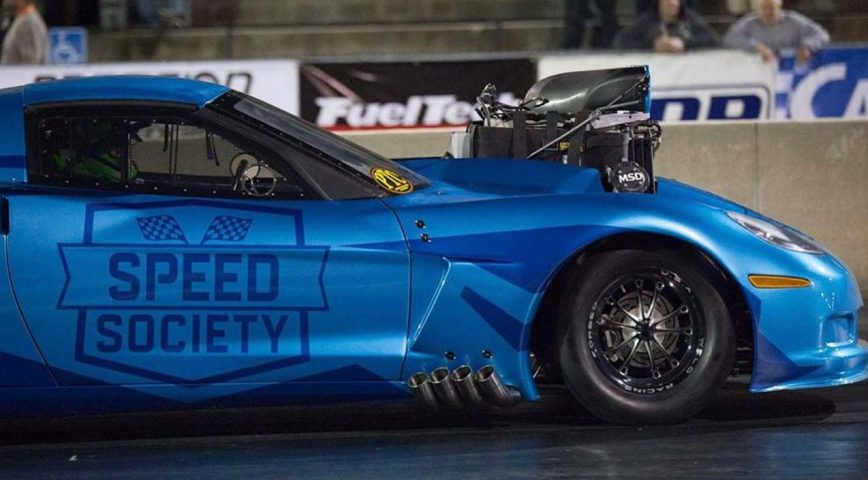