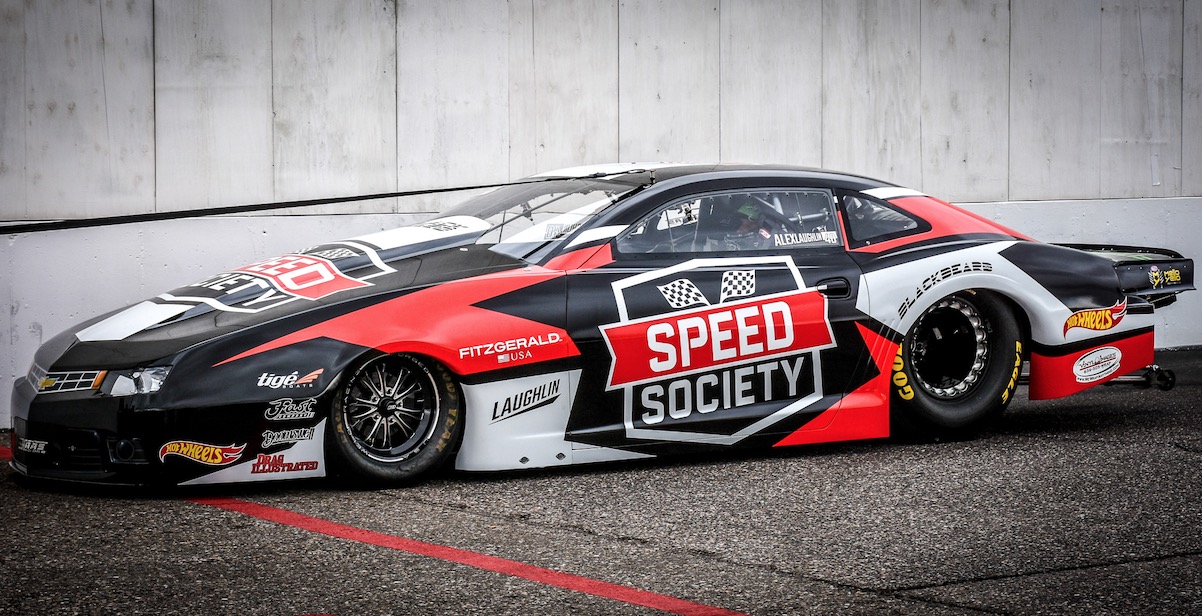 Our very own Alex Laughlin will be rocking our favorite colors when the 2019 NHRA season opens in Pomona in just a couple of short days. Laughlin’s Pro Stock Camaro will be wrapped in the familiar red, black and white colors and the Speed Society logo will be emblazoned on the doors and hood.

After an admittedly lackluster 2018 in the Pro Stock world, Laughlin is looking forward to starting with a clean slate in a new car that certainly showed a lot of promise the last few races of the year.

The Jerry Haas-built Camaro was in the top 3 or 4 quickest cars in each qualifying session after Alex took possession of it late in the season, and the car finally offered the Elite team some consistency after they’d struggled to find repeatability throughout most of the year.

“First off, I’m excited to start the season on a clean slate. We struggled pretty bad last year and it wasn’t until the last few races that we had everything back to where we wanted,” said Laughlin. “Partnering with Speed Society is a great way to start the season with a big splash, especially in a world driven so much by social media. I’ve been lucky enough have partnership and friendship with these guys since about 2015 and I’m excited to still be working with them.”

Alex will have a full workload for the 2019 campaign, adding his Elite-backed Pro Mod Camaro for the 18 race NHRA Pro Mod schedule and plans to hit several big no prep events in a ProCharged 2014 Camaro to his already hectic Pro Stock schedule as well as hitting as many races as possible in his blown radial-tired C6 Corvette, which also bears the Speed Society logo in large format. But if you know Alex, you know he thrives when the pressure is on, so look for win lights galore from coast to coast as he chases Wally’s and big checks in no fewer than 4 drastically different cars, each with its own personality and requirements from the driver.

We can’t wait to make the trip to Pomona, where we’ll spend the weekend rooting for Alex and the rest of the Speed Society drivers to kick off the season in winning fashion!