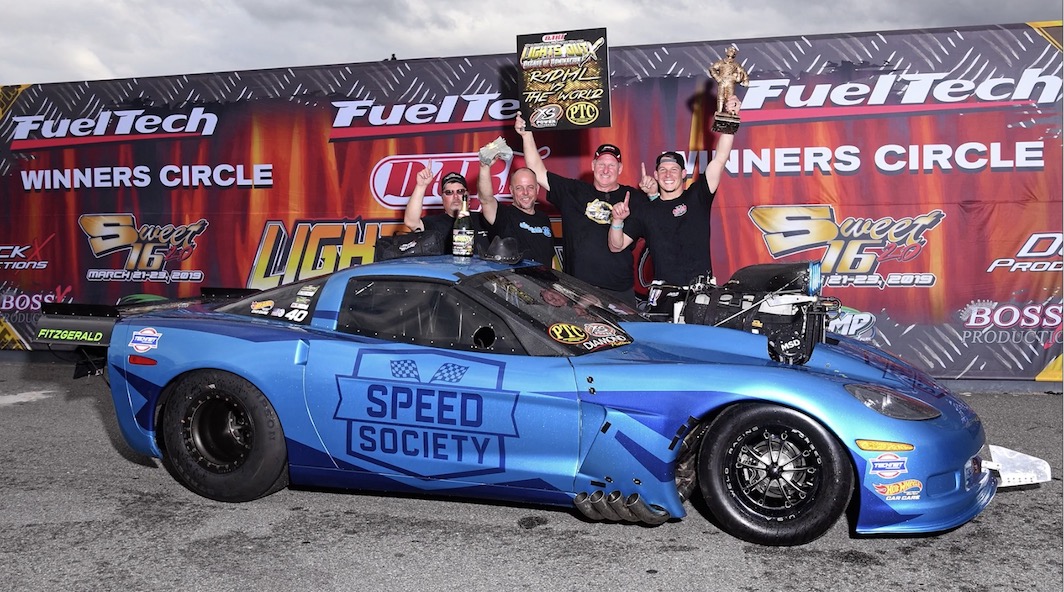 You know when you pull your Radial vs the World Corvette out of the trailer for the first time since you parked it last fall and lay down the quickest number the car has ever run, you’re probably going to have a pretty good weekend. That exactly how our very own Alex Laughlin’s weekend started at Lights Out X, a race most of you should know by now that he went on to win.

The first time Alex’s car went down the track after his close runner up at No Mercy 9, tuner Frankie Taylor unleashed a stellar 3.69 elapsed time, making the Speed Society C6 the first screw-blown radial car in the 3.60’s and setting the stage for the awesome weekend that followed. The car was as consistent as a bracket car all weekend, with the only significant deviation from mid to high 3.60’s coming when the car ate the blower belt before it reached the finish line.

With a best of 3.66 in qualifying, Laughlin would go into race day as the #4 qualifier, lining up alongside another blown blue Corvette, this one belonging to Tennessee native Tim Kincaid, in the first round. Kincaid is certainly no pushover, and Taylor and crewman and co-tuner Jeremy Parsley had Alex’s hotrod tuned up and ready, laying down a 3.69 to Kincaid’s 4.02, which would have been quicker had he not had to pedal the throttle after driving into a wheel stand.

Alex would face Mike Decker in another blower car, this one of the Camaro variety. Decker, a longtime Outlaw 10.5 runner, slowed to a 3.94 after also driving into a wheelstand near halftrack. Laughlin’s 3.72 would move him to round 3, where he would face a resurgent Mark Wooduff, who’d just laid down a killer 3.65 to earn lane choice.

It wouldn’t matter, though, as Alex would lay down another 3.66 to take down Woody’s solid 3.68 in one of the closest races of the day. That win would earn Alex a date with #1 qualifier Kevin Rivenbark in the ProCharged GALOT Motorsports Camaro. Rivenbark had seemed invincible through the first 3 rounds, but he knew Laughlin had just laid down a killer run, and the pressure seemingly got to him, as he turned on the red bulb, throwing away a 3.66 that would have almost certainly won against Laughlin’s slowing 3.72 after his car lost the blower belt on the top end.

With his lucky break out of the way, Alex looked over to find longtime small tire badass Daniel Pharris and his twin turbo Pro Mod Mustang in the other lane. Pharris too had been super consistent all weekend and came into the final round looking to pick up another huge win for himself and his team. Both drivers were keyed up for the final and the race would be decided right there on the starting line.

Needless to say, Alex earned his $50,000 payday, although he was quick to point to Taylor and Parsley as the men behind the win. We say it was a team effort, and we couldn’t be prouder of Alex, Frankie and Jeremy for putting the Speed Society car in the winner’s circle at one of the biggest small tire races on the planet!

Alex Laughlin – Lights Out 10 Radial vs the World Winner!!

Alex Laughlin had one consistent car all week long during Duck Week at SGMP. With Frankie Taylor and Jeremy Parsley making his Blown Corvette perform round after round, he only had one job to do…. AND HE DID IT! Congrats to Alex and his entire Team on the Lights Out 10 WIN in one of the TIGHTEST Finals we have EVER seen at a Duck X Productions event!!Thank You to our Event Media Partners ASA Performance and ProTorque!! Support thos who Support us!!