Alex Laughlin Wins $50,000 in First Ever Stint With New Car at Doorslammer Nationals 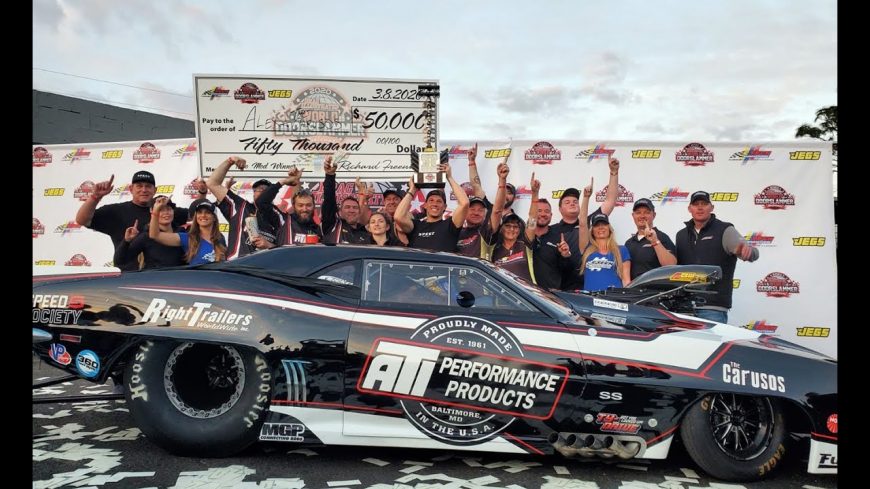 This past weekend, big money was on the line at Drag Illustrated’s first-ever World Doorslammer Nationals. Among those looking to go home with a pocketful of cash was Speed Society‘s own Alex Laughlin. Normally, we would expect Laughlin to be going rounds in his Pro Stock car. However, he decided to double it up and run two classes. Instead of simply wheeling his own ride in the Pro Stock category, he would team up with Caruso Family Racing and their Pro Mod as well.

This would mean that he would be competing for a combined $125,000 between the classes!

While Pro Stock didn’t exactly pan out this weekend for Alex, he had a little bit more luck in the Pro Mod class. In fact, he would make it all the way to the final round where things would get rather intense.

The pair would jump off the line with somewhat similar reaction times. Tutterow would cut a .042 light to Laughlin’s .045. Drag Illustrated relays that Tutterow suffered some tire shake and a backfire. Meanwhile, Laughlin would make a clean pass to take home victory. While it’s obviously important to be fast, sometimes, fans forget that being consistent is just as important. Sometimes, consistency is even more difficult as well.

That’s not even the craziest part, though.

As we mentioned, Alex is running two classes. This particular class happens to be behind the wheel of a car that wasn’t his. In fact, at this event, Alex would see his first-ever passes in the Caruso family Chevrolet Camaro.

I guess that we could say that he managed to get rather comfortable with the car in a hurry during qualifying and testing. In fact, he even managed to qualify third overall before eventually taking home the win.