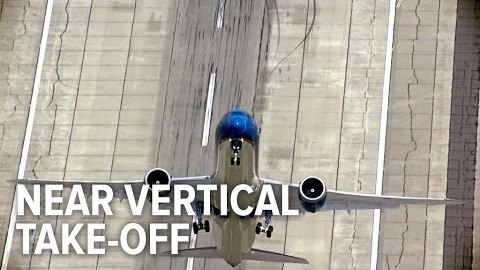 If you have ever been on a commercial flight, you’re probably familiar with the g-forces that are pushed against you as the plane takes off at a slight angle to the ground.

Now, imagine that feeling if the airplane decided to launch nearly vertically, almost lifting itself to a right angle with the ground beneath it.

That is exactly the case for this Boeing 787 Dreamliner as it lifts off at the Paris Air Show and takes itself almost straight up into the air, an amazing feat for such a heavy flying machine.

Check out the video below that shows the plane’s ascent that will leave you wanting more. It’s not too shabby of a feat, especially when you consider the vehicle at hand.

Check out what Boeing is calling the lightest metal ever in the video below.