When it comes to road rage, well, the best advice that we could possibly give you ...

When it comes to road rage, well, the best advice that we could possibly give you would be “just don’t.” Almost all of the time, when comes to getting in a road rage debacle, it’s not going to be something to benefit you in any way and there certainly are no winners. Sure, you might be able to blow off a little bit of steam which is fine, however, if it gets into a combative situation with another driver, there’s pretty much no chance that you’re going to win. Even if you’re able to come out on top, you still end up being the loser who stopped to participate in such a situation.

This time, we join in on a very confusing series of events that really, we had to watch several times before figuring out exactly what was going on. At first, it looked like road rage and that’s what we’re going to classify it as because it looks like the driver of the car in front is trying to hop out of confront the person behind him, however, when this turns into is a bunch of mass confusion as nobody here seems to know what’s going on and the driver of the car in the front even manages to run himself over after he hops out of the driver’s seat and starts to walk back toward the other car, forgetting that he left his own vehicle in reverse.

If you follow along down in the video below, you’ll be able to check out the entire situation as it unfolds with somebody who apparently is waiting for a parking spot and somebody else who doesn’t want to wait around behind them. I think that what this all comes down to is basically focus on the road and making sure your eyes are in the right place along with being able to keep away from distractions because if we were to take a wild stab in the dark, that’s what we would attribute this one to.  Maybe you can come up with your own synopsis of exactly what happened here.

Road Rage Ends With a Bang! 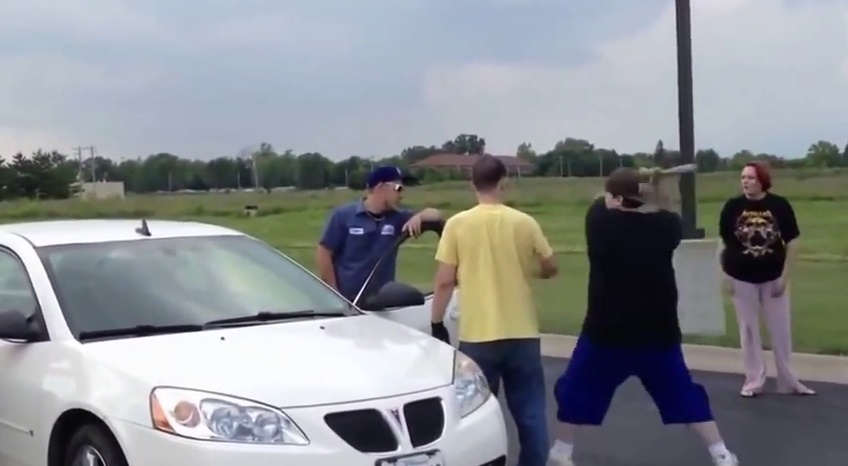