In a variety of different videos across the internet, we have all been exposed to ...

In a variety of different videos across the internet, we have all been exposed to exactly what can happen in inlets around the world. Conditions in these areas between the ocean and another sizable body of water can be pretty rough. With a mix of big swells and fast-moving tides, it can be really easy to end up biting off more than you can chew as a boat owner.

Therefore, many videos posted around YouTube show off of boaters trying to make their way through rough inlet conditions and it can get pretty interesting. Most of the time, they just get bounced around a lot before eventually making it through. However, every once in a while, things get a little bit sketchy.

This time, we check in with a Cobia center console that definitely falls into the latter category. It seems as if this boat owner really got himself into a position where things could’ve gotten downright dangerous and rather expensive in a hurry.

As somebody with a boating background, I can say that there are a few rules of thumb when facing a situation like this. Don’t take them to the bank because it’s just one guy’s opinion and it’s definitely not advice, but here goes nothing.

It appears, at least from our angle, that the boater in question here wanted to slowly make his way through the situation. This is kind of what our instincts will tell us to do and it a reasonable response. After all, when you’re launching off of high waves in an inlet, it’s not going to feel good. However, in a situation like this, you’re going to want to keep pushing forward at a decent rate of speed. It might be a little bit scary but trust us, it’s a lot less scary than letting mother nature do with you what she will.

This is all speculation but at this point, we would probably guess that when the waves started getting bigger and bigger, the boat owner got a little bit scared, and understandably so. Being in a spot like this can really get the old fight or flight going.

It was at this point that he made what was perhaps the biggest mistake of the entire endeavor. Watching the boat try and turn around in the middle of sizable swells was really enough to make our stomachs churn. In fact, the boat came incredibly close to rolling over and even took on a decent amount of water as it pitched sideways after getting decked by another oncoming wave.

Luckily, at the end of it all, the person behind the controls here was able to get the boat out of danger. For a minute there, it definitely looked like everybody was going to be swimming and this boat was going to end up at the bottom of the inlet.

Inlet Waves Get ANGRY and it's Too Late to Head Back 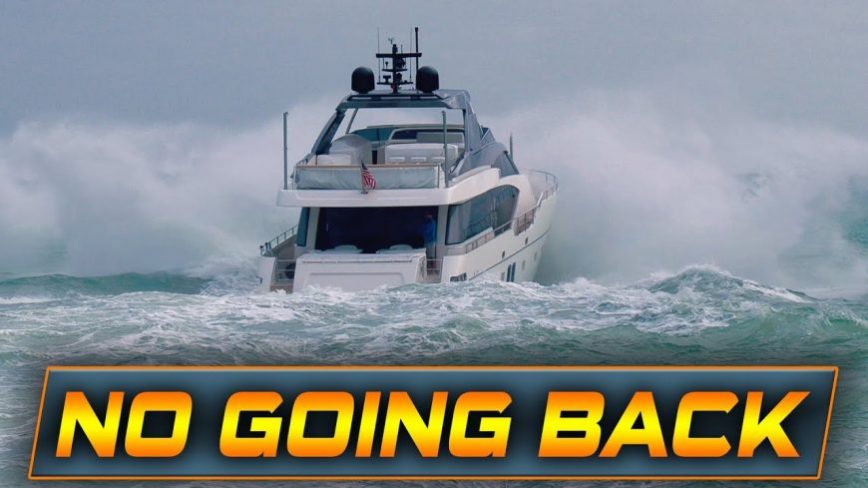