ATV on 28 Inch Rims Doing Donuts Proves How Stupid This Trend Really Is!

ATV on 28 Inch Rims Doing Donuts Proves How Stupid This Trend Really Is!

Picture this: you just slapped some 28s on your ATV to make a true one of a kind ...

Picture this: you just slapped some 28s on your ATV to make a true one of a kind machine. What better is there to do than rip a few donuts at the local park? Well, we could think of a lot of things, but apparently this guy had his mind set on putting on a show, drawing even more attention to himself than he would by simply rolling around on those gleaming pieces of chrome, kicking the sideshow up to another level as he would throttle down and drive to impress! The result is this wild video that someone managed to capture of the moment!

We can practically hear the transmission on this thing crying from here as these oversized wheels are used to tear up some off-road terrain! In all seriousness, the amount of time and money spent to do something like this to an ATV has to be over the roof! While this style of four wheeler probably isn’t one that too many can identify with, we most definitely give him an “A+” for ingenuity! If it floats your boat, then go out there and own it like this guy! He’s totally rocking out with style that you’ll be able to see for miles! The people who take care of the park might not be too happy, though.

Check out the video of the screaming four wheeler below showing off what it’s got! The owner has to be at least somewhat dizzy after this one as he throws lots of chrome and circular motions in the same mix. Heck, even as a bystander watching a video, I almost got a little bit of vertigo watching this display unfold in front of my eyes. After seeing this display for yourself, be sure to tell us what you think of this over the top display that this guy obviously went through some pretty intense paces to put together. 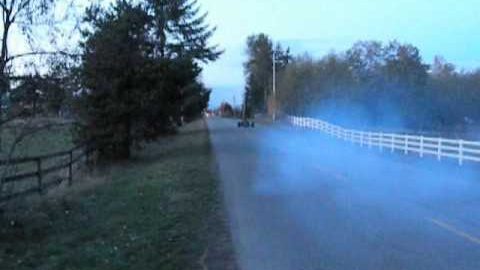