Audi A5 Running From The Police on the Autobahn Runs Into HUGE Problem!

Audi A5 Running From The Police on the Autobahn Runs Into HUGE Problem!

If you know about the Autobahn, it’s probably because of the road’s ...

If you know about the Autobahn, it’s probably because of the road’s sections that allow you to travel in excess of whatever speed you want. The road is a sort of car guy’s dream as it allows you to open up the throttle and cruise at whatever velocity you’re comfortable with, all without having to look over your shoulder and make sure that the police aren’t clocking your speed. I would venture to say that driving down this road is on the bucket list of anybody who has ever cracked into the throttle of a car and simply wanted to go faster than the speed limits would allow.

This time, however, it isn’t a legal high-speed run that these guys are after. Instead, whoever is behind the wheel of this Audi A5 is on the Autobahn, running away from the police. The high-speed chase makes its way down the highway as this Audi driver decides to dip and dive in and out of traffic, rolling his way down the shoulder as he passes by cars that are only traveling at a fraction of his speed. This does him well for a little while until he has a rough patch of road that doesn’t quite agree with the car and it’s at this point that he probably began to regret exactly what he decided to do that day.

If you follow along in the video below, you can see the exact moment that this driver probably wished that they had a time machine to hop in and go back to that morning. When the Audi hits what looks to be a loose patch of gravel, it’s all over from there as the car loses control, skidding into some nearby grass before veering back on the highway and colliding within an unsuspecting minivan driver who had absolutely no time to get out of the way as this reckless driver ended up doing some big time damage. 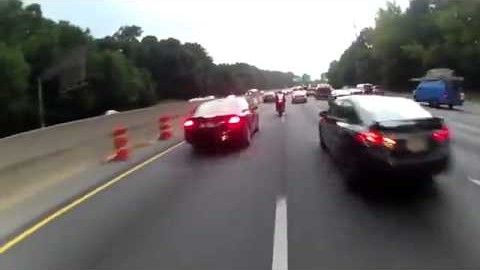