AZN From Street Outlaws Rides Shotgun in Blown Camaro Killa B aka the Burnout King! 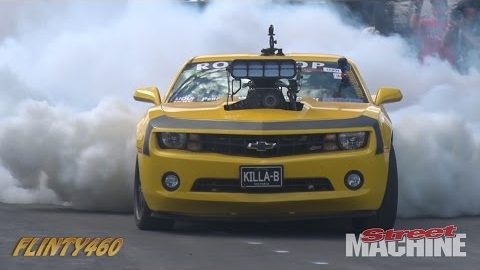 This winter, during the doldrums of the off-season here in the States, Street Outlaws stars Farmtruck and AZN headed waayyyy south, hopping a flight to the Land Down Under. While we’re battling boredom, our Aussie brethren are smack in the middle of the summer, so the 405’s dynamic duo decided to head to the 30th annual Street Machine Summernats.

During what may be the greatest concentration of blown street cars on the planet, the Australians have one of the gnarliest burnout contests on the planet, giving any hotrodder who’s interested in shredding their rear tires a chance to light them up in front of the massive crowd. AZN took the opportunity to jump in the passenger side of the blown Bumblebee lookalike 5th Gen Camaro known as Killa B and light up the backside rubber for the rabid fans.

Killa B’s supercharged engine screamed beautifully as the smoke bellowed off the tires while AZN pumped his fist from the passenger seat, sending the crowd into a roar! The thick smoke blocked a good bit of the show from the cameraman, but you can still hear the roar of the engine, so ratchet the volume to 11 and enjoy the sounds from the Summernats!

« Nitrous Trans Am Lays it on the Bumper! How Much Nitrous??? All of It!!