AZN Races a Kid For PINKS – Lose the Race, Lose Your Ride! 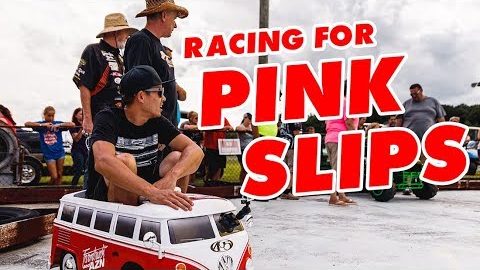 Every once in a while, when a driver is confident enough in their car, they will race for pink slips. This means that they put up the title to their car in lieu of the title for a competitor’s vehicle. The winner will end up going home with both vehicles. It’s not too often that we see this phenomenon as there aren’t many folks confident enough to try it. With one misstep or malfunction with the vehicle, someone is losing an expensive automobile.

However, when it comes to the guys on Street Outlaws, we would argue that they’re probably the closest that it gets to being brave enough to try this kind of a race. This time, the format comes to life as Azn steps up to the plate to race for pinks. It probably does help out a little bit that he is only racing a Power Wheels. That’s beside the point, though, as one of our favorite Street Outlaws is having an absolute blast.

This past weekend in Delaware, the dynamic duo would show up for Truckfest and fans couldn’t wait to see the action. They wouldn’t be drag racing this time, though, as the duo decided to take part in the tough truck challenge. For this challenge, they even built an off-road version of the farm truck. The rig known as “Dirt Farmer” is a story for another time, though.

Before they got into the tough truck racing format, though, Azn decided to have a little bit of fun and enter himself in the Power Wheels race designed for the kids. After setting a record for the slowest to ever make it through the course, he would decide that he wanted a little bit more action. This meant calling out any kid on the premises to a race for pink slips. The winner would go home with both sets of Power Wheels.

At the end of the day, it made for an epic moment and certainly an awesome story for the kid that went home with what might be the ultimate piece of Street Outlaws memorabilia.

« NASCAR Star, Chase Elliot, Takes us on a Tour of His Motorhome