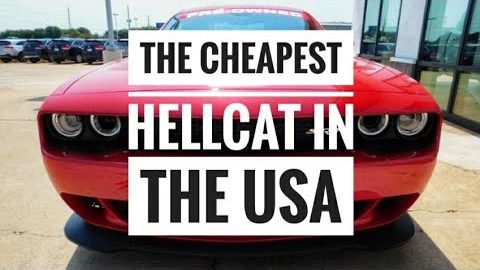 I’ve found one of my favorite channels over at Mod 2 Fame, and Stefan and Co. have found something that will ensure they have plenty of content to come for the next many months! It’s a project they’ve been working on nailing down for quite some time, and finally managed to close the deal and become the owners of what they’re claiming is the cheapest Hellcat Challenger in the country.

While Stafan’s personal rides include quite a bit of variety – he has a C5 Corvette, a Porsche Panamera and a R/T Durango – he’s found a home within the Mopar community and has centered his focus on fully immersing himself in their world. So the decision was made to unload the Porsche and pursue the goal of tracking down and buying the cheapest Hellcat in the country. It wasn’t an easy search, though. If you follow the channel – and you should – then you know this has been tossed around for a while and Stefan spent a month chasing leads and searching endlessly online for the perfect car at the perfect price.

As is often the case with searches for great deals, he found it in an admittedly unexpected location: a Kia dealership. It’s not clear is somebody traded the 707 HP Hemi monster in on something much much MUCH more practical and, to be honest, boring or if the dealership bought it at auction to flip. Either way, Stefan found it in Bossier City, Louisiana and bought it, sight unseen, from Orr Kia.

While he didn’t reveal the price in this video, the car was listed on the dealership’s website at $45,000, but there’s a chance Stefan talked the dealer down from that price. When he and Joe head to Louisiana from New York to pick the car up, they’re planning a couple of stops on the way back north, including one in Nashville that I personally will be attending to meet Stefan in person and check out his new ride. From there, he’ll be heading up to Columbus, Ohio, then on to his home state of New York where we have to assume mods to the Hellcat will begin promptly!

I’m excited about the opportunity to meet up with Stefan and some Nashville locals, and can hopefully get some exclusive content just for you guys while we’re out and about in Nashville.

« Mic’d Up with Antron Brown in the Staging Lanes